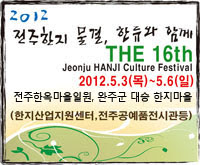 I wrote last year about a great Hanji Festival that I had attended during my stay in Korea.  It's an annual event of Korean culture and a large part of it is on Hanji. Jeonju is a famous area for hanji paper and it's traditions.

If you're living in Korea or are planning on being there this weekend then don't miss this wonderful festival. 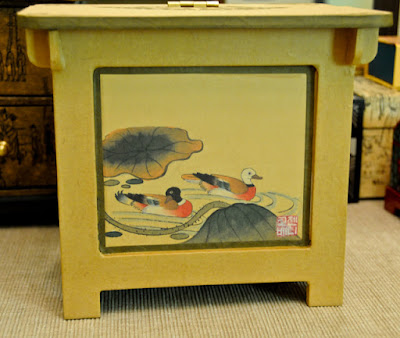 I've been doing some research on different  pieces of Korean furniture knowing that hanji was such a big part of what they would use. I came across the article below describing the shape of the Korean rice chest.  I've see these replicated in Hanji pieces and was wondering  about the unusual shape of this piece of furniture. 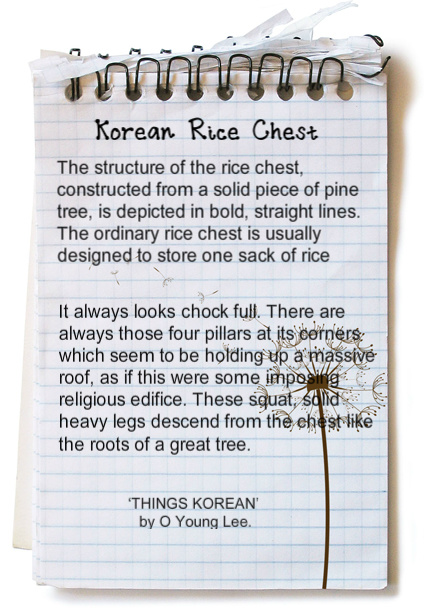 It use to be a very important part of furniture in a Korean kitchen as the holder of the staple food in their diet. Rice along with kimchi was, and still is, the basis of their three meals a day. The solid rice chest was generally made of pine but never decorated as a reminder of the importance of it's presence in the home.

I've been working on a hanji designed piece. ........ mine is decorated though, as it is much smaller than the original chests and it could be used on a desk or a sideboard to store tea bags or spices. 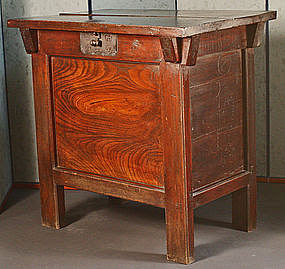 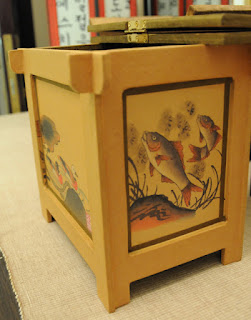 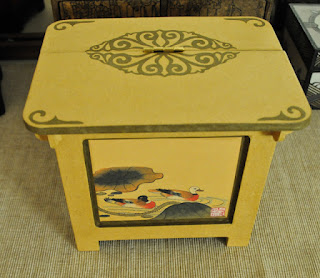 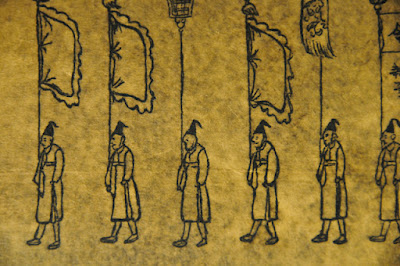 After recently making the magnolia box with lots of time consuming cutouts required, this week I decided to make something a bit different.


The beauty of this craft is that you can produce items in a comparatively short space of time or, you can spend a lot more time concentrating on fine details and take months to complete a project.

I had in mind that I wanted to create an item using  a piece of hanji paper that I bought on my recent trip to Seoul. It's a very busy, traditional design depicting an army of soldiers marching across the paper  carrying flags, riding on horseback, or playing instruments.


It reminded me of the re enactment of the changing of the guard ceremony that I've seen at the entrance to the Deoksu Palace in Seoul. 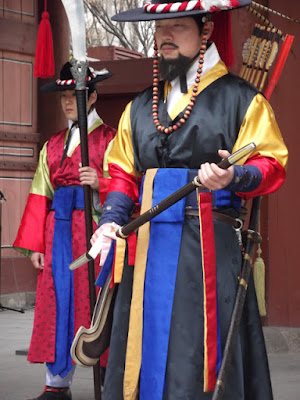 The royal guards, called 'Geumgun' (Restricted Area Army), under the command of the Chief gatekeeper, use to be in charge of defending the Palace, similar to the Royal Guards at Buckingham Palace. 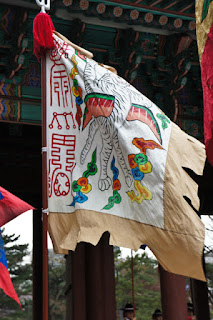 The complete procession during the Joseon Dynasty included the main gate-opening and closing ceremonies, military parades, and marching ceremonies.


It's full of pomp and ceremony and well worth a look at if you're in Seoul. 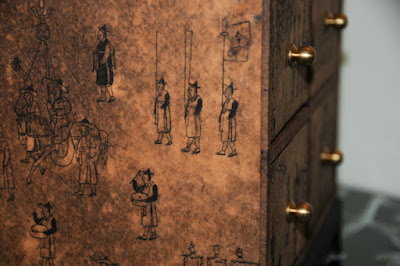 The paper I wanted to work with is quite a thick, fibrous paper which has been bleached out and then  the print placed on top.

I wanted to keep with the traditional theme so I cut out a chest with 4 drawers, a base  and a curved top to make it look like an old Korean chest.

It has a rustic look to the paper design which is reflected in the simple curves and shape of the set of drawers.

Typically an item like this would have had an everyday use in a Korean household centuries ago.


It could have been placed on a side table to store small pieces of jewellery or even used in a kitchen to store spices and small twigs of mountain herbs. 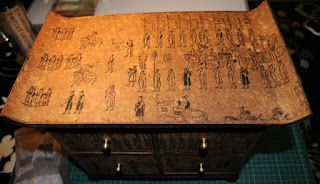 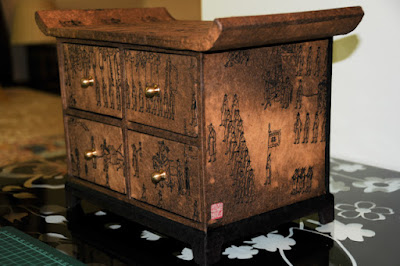 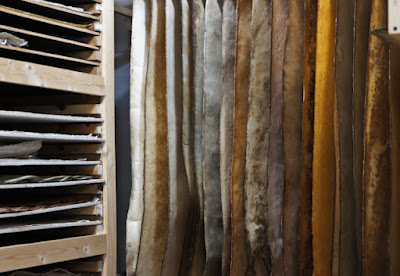 Whilst we were wandering through the back streets of Insadong a few weeks ago we discovered this shop called Jang's Paper which sold specialty handmade papers. When talking to the lady in the shop she said her father made the paper and she sold it. As we entered the walls looked like slabs of marble but on closer inspection I realised that they were sheets of paper. This wasn't just any hanji paper shop but one with very different designs and much more upmarket prices.  Hanging in the corner were large sheets of paper approx 6 times the size of normal sheets I buy and they were from $150 US a sheet. 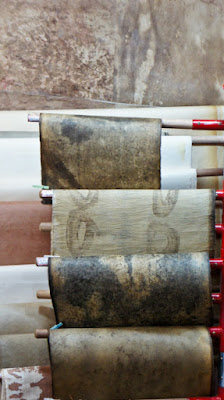 Smaller sheets about half the size  were from $20 US a sheet so I just looked in awe at the designs and the quality of the paper.  You'd really need a special project to use them on. 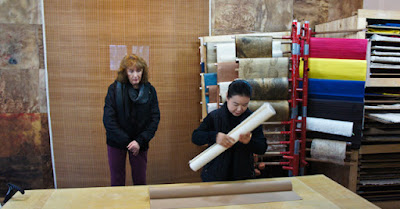 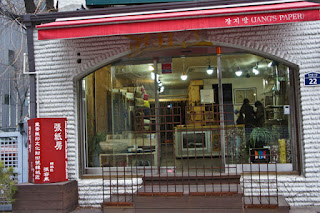 I did discover some finer paper for the glass on lamps in white, with  designs imprinted into the paper by using more and lesser depths of fibres so I had to indulge and buy a few of these.

It was an exciting find and one which I'd love to explore further.
at April 15, 2012 No comments: 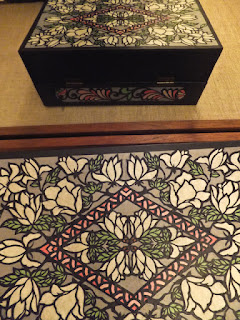 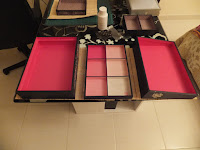 I've finally found time to finish my magnolias box. I decided to go bright inside the box reflecting on the different shades of the magnolia flowers from a deep pink to white. Each segment of the tray was done in a different shade of pink down to a very slightly off white shade of pale pink.

I've put the hinges and a clasp on it and given it a couple of coats of varnish on the outside and finished off with my name stamp for prosperity.

Now onto another project. Oh, the possibilities are so broad especially after bringing back so many new supplies from Korea and gaining a better insight into how other Hanji artists are designing and producing their items. 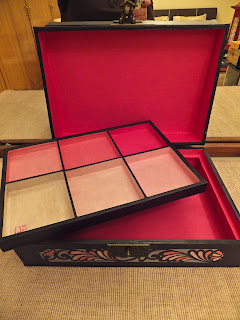 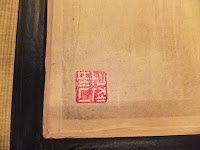 Many people have been asking what did you do on your Hanji tour to Korea,? Well, the answer is lots of different activities and here's just some of the ones that stood out.

Firstly we had a focus for our short visit which was to learn as much as we could about our craft, to visit different hanji artists, to see how the paper is made by hand and to learn through having a lesson on how the locals work with the paper. We were based very close to Insadong and therefore we were able to browse the many Hanji supply shops as well as the  Arts and Crafts shops in the district.   During our time there we visited the Andong paper factory and had a 3 hour lesson and saw how the paper was made firsthand.

Secondly we  incorporated time in the program to sample the culture of the Korean people  and this we did by taking a conducted tour to one of the temples and to a couple of Palaces in Seoul to see the changing of the guard ceremony and to visit some museums, in particular the Embroidery, Folk Art  and National Museums. We went to see 'Nanta', a highly successful and  typically Korean Musical show and we sampled vegetarianTemple cooking whilst visiting Sanchon restaurant in Insadong. It included a beautiful cultural show of dancing and drumming. We also did an overnight trip down to Andong to stay in a traditional Korean house on the floor with a yo and the toilet miles away in cold weather  - I think we're getting too old for that, but at least we experienced it !!.

Lastly we tasted the cuisine of the country and enjoyed many great meals at local restaurants eating, Bibimbap, Panjeon, Chapchai, Mundoo and various recipes using fish eg. smoked, with a spicy sauce and steamed. 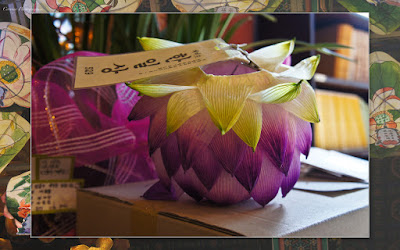 During our trip to South Korea we were invited to the home of Myong Sook OM, an outstanding Korean Hanji Artist who studied Fine Arts for 5 years in New York and she's currently a teacher to expats in Korea.
She's held several exhibitions of her work  and is involved in SIWA (Seoul International Women's Association). It was great to be able to sit and talk to her in English about her craft. At her OM's Hanji Studio in Seoul she conducts classes for expats who want to learn the craft and they come from countries all over the world. She's  held several exhibitions of her student's work over the last few years as well.
"As an instructor, I unreservedly appreciate their(her students) exposed and unexposed efforts in transforming diverse experience and unique artistry into the forms of Korea's traditional Hanji. I also feel profound pride and sense of fulfillment in that their creative activity contributes to the globalization of Hanji craft." Myong Sook's words of introduction to the 2010 Global Hanji Work Exhibition, Seoul, Korea.
On arrival at her small apartment  we immediately recognized that she was a very humble lady who  has a strong desire to help other artists with similar artistic interests. She gave freely of her time and passion to discuss her work with us and made us feel extremely welcome in her home.

As she started to bring out her works of art we were struck by the fact that many of her lamps were large, including the Yellow lamp with water lilies (above) that's around 3' tall and the Large brown lamp which is around 4' 6" tall. She's also done a circular black lamp with waterlilies that stood about 4' tall and when the lights were switched on in these lamps the true genius of the placement of the papers was evident to us and we all went oooh!. Amazing work.
She works with naturally dyed papers only and uses a special technique of layering the paper to reach the desired effect of  different shades and thicknesses.
One of her  interests is  designing waterlilies to place onto lamps, cabinets and boxes. I couldn't help  but think that this may have come from the many beautiful waterlily lamps in the Buddhist temples that are scattered all over the country.
She designs all her own cutouts, using her Fine Arts background,  then cuts them  by hand to produce stunning examples of this craft as seen in the small table below.


She also uses dyed paper to place behind some of the cutouts to give the effects of shading of the different elements. 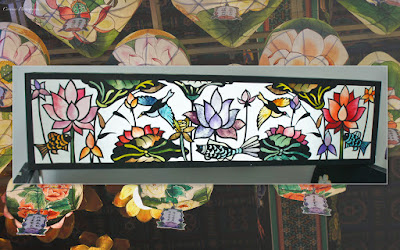 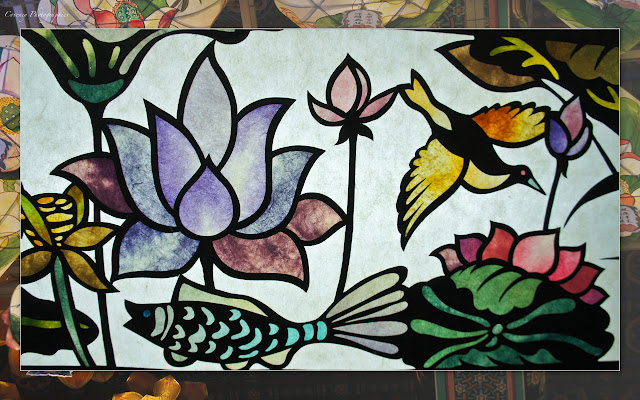 We were truly honoured to be given this opportunity to meet up with her and to see first hand her amazing  hanji work .

I'm hoping to go back to Korea sometime soon to study with her for a while.

Our Hanji happenings tour to Korea was a resounding success. 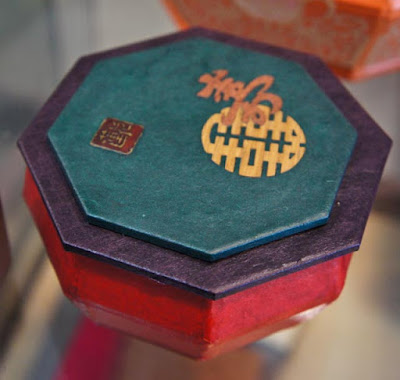 Three of us set off from the UAE with a single focus of sourcing out hanji papers and a wish to improve our hanji making skills through instruction and discussions with other hanji artists.

What I personally discovered was how far hanji has come from the old traditional methods of cutting and pasting to the modern laser  cutting and mass production of hanji objects.

I emailed ahead and organised a 3 hour lesson with Gui-Sook Yang at the Andong Paper factory and we learnt how quick and easy it is to produce an item by using  paper print outs then placing laser cutouts on top.

I'm well aware of the long and painstacking traditional methods of producing a hanji item but I now realise how automated this craft has become to cater for the growing demand, mainly by tourists, for these craft items.


The Andong Factory has a huge selection of papers and we all enjoyed choosing papers to bring back to the UAE for our new projects. It was such a treat to be able to walk into this shop and choose the papers off the shelf rather than order them on line.

I'll write more about the things we found out about our craft in the following postings.......
at April 02, 2012 No comments: