On the Melbourne Korea Week program there was a fabulous fashion show by fashion designer Hanbok Lynn who'd come from Korea to showcase her beautiful hanbok creations. 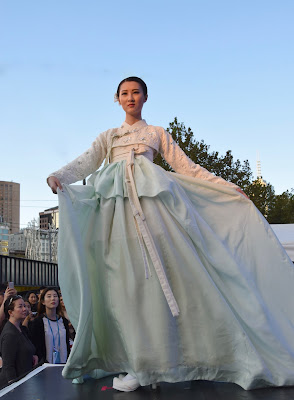 They weren't made of Hanji but they were stunning.  Here's a glimpse of the creations and the details that I was able to capture. 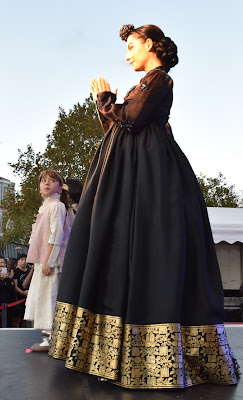 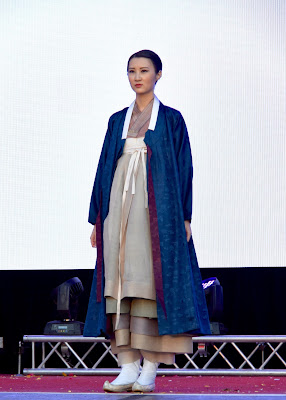 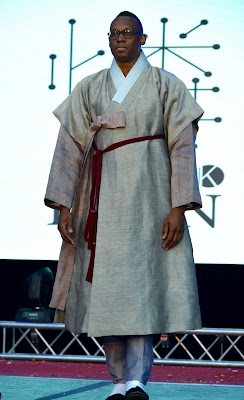 The children were adorable... 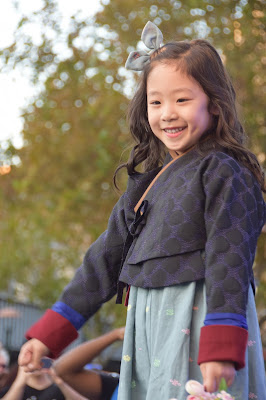 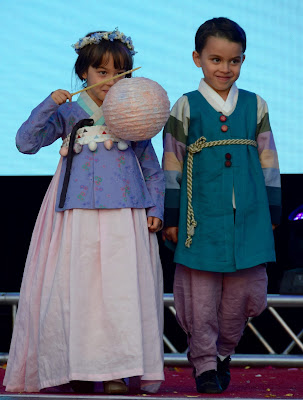 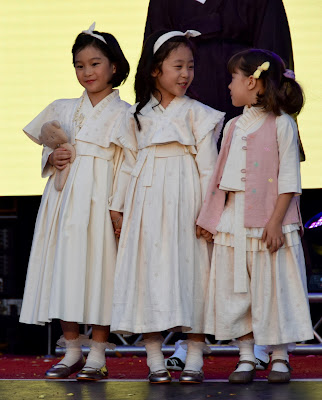 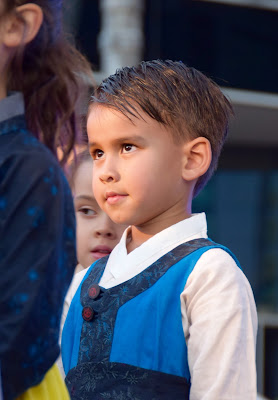 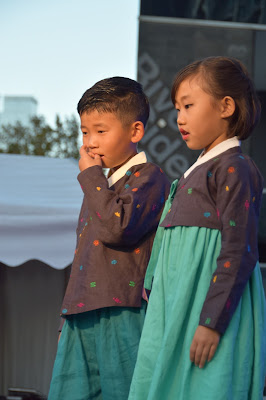 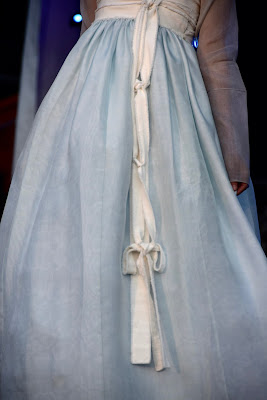 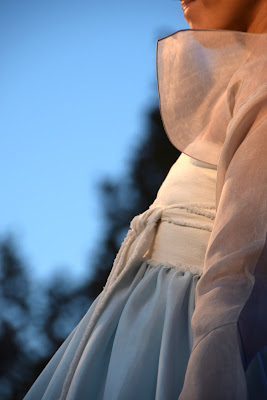 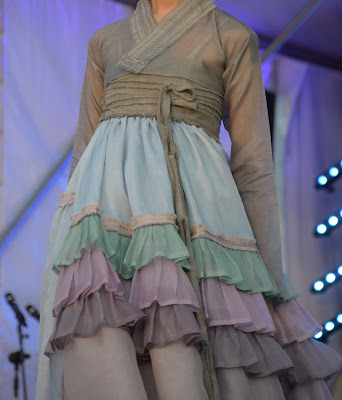 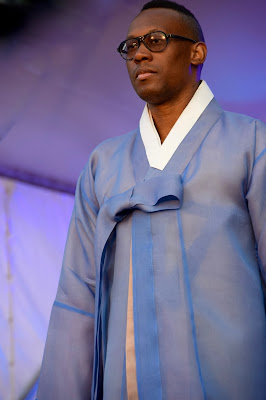 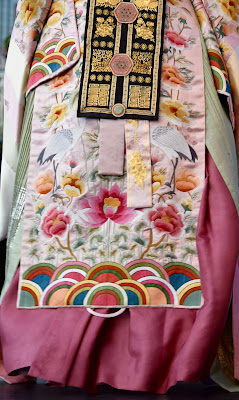 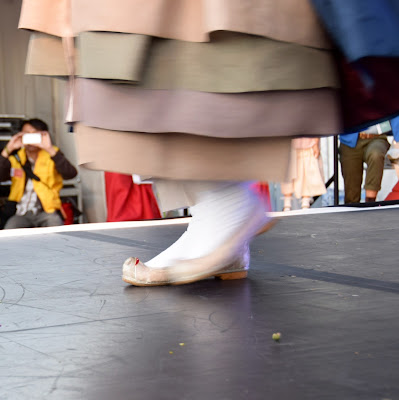 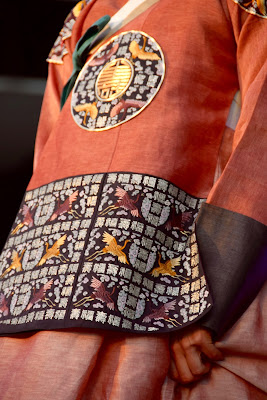 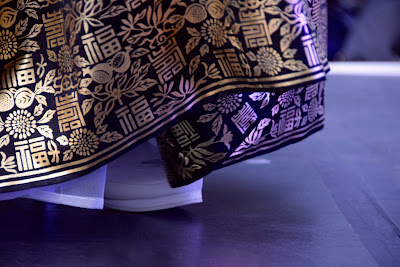 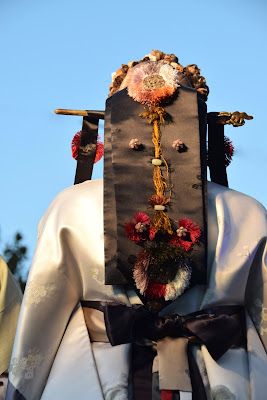 The Melbourne Korea Week Festival for 2016 has now come and gone.

Life has been pretty hectic since I was contacted about 3 weeks ago by the Korean Consular General's Dept. in Melbourne  and asked if I'd be interested in exhibiting some of my work and if I so wished,  selling some pieces. I was taken aback at first but thought, what a great opportunity to get more known about Hanji and to introduce the fact that this Australian lady loves doing a traditional Korean craft.

I didn't have many small pieces left in my studio so I worked really hard over the ensuing weeks to get everything done in the time frame I'd been given, and at the same time, making sure I had pieces that would travel well as I had to carry everything in my personal luggage on the plane trips over and back. 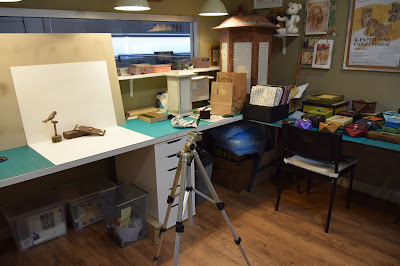 I photographed everything, packed them up very carefully and I, along with Ron my trusty husband and helper, headed for Melbourne on a 6 am flight last Friday, with over 40kgs of luggage.

Over the last few years Korea Week has been held as a one day event in Federation Square, Melbourne but this year it was bigger and better and although it's been named Korea Week it was held over 4 days. Two days were in City Square and 2 days at Queensbridge Square.  I'm not too sure why the event was split over 2 different venues but I was asked to go across from Adelaide for the Friday/Saturday, the last 2 days. 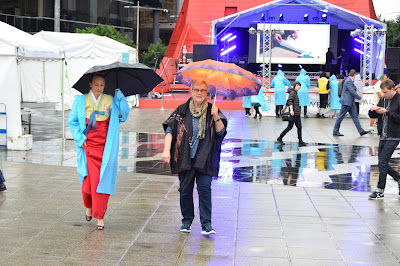 Unfortunately it was raining on the Friday and it continued for about 5 hours which put a dampener on events, and to be honest, I really did wonder what I was doing there but as evening fell the wet weather abated and the K-Pop competition began on the central stage. This certainly livened up the place and people were soon gathering around and enjoying the music. 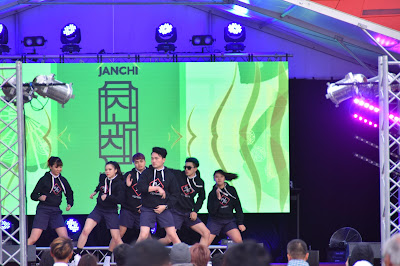 Many of the events, including the Opening Ceremony, were held on the Saturday which was a grand affair with lots of dignitaries, Korean traditional dancers performing the famous fan dance, drummers, and an amazing fashion show. (I'll write more about the fashion show in a separate post as the garments were truly  breathtaking).

A team of people had come down from the Sydney Cultural Centre for the event and I was delighted to meet up with some of the lovely people I'd met there previously when I was involved in their Hanji Festival & Exhibition, earlier in the year.
I had a banner made for the event and it's one which I can use again. There was a  problem though because when I ordered it online I didn't take a lot of notice of the size of it and when it arrived, I was thrilled to get it, but as it unraveled, I realized it was over 3 metres long !!  I had to quickly reorder and get a more usable size and luckily it arrived just before I was due to fly off to Melbourne.

I set up my area and people soon came to check out this strange Australian lady and her Korean Traditional craft.

The days were filled with people inquiring about Hanji, an interview with YTN Korean Television and  2 different segment on the stage during the event.

What an experience !! I'm so glad I went as I enjoyed a wonderful cultural event, I was able to talk to so many people about Hanji and I even managed to sell a few things.

I don't fully understand  what excites me about Korean culture and Hanji in particular. It could be the wonderful people that Ive met on my Hanji journey, it could be the Korean traditions that are so well entrenched into their culture or, it may just be, as someone has suggested to me, that I was 'Korean in another life'. Whatever it is, I never tire of learning more about Hanji and  talking to others about what I've learnt.
at May 03, 2016 No comments: