Boxes by Ulla Bruun and Kamma Rahbek in Denmark ..... 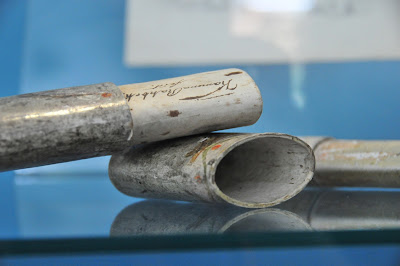 I'm finally back at my desk for a short while before heading off to see my family in Australia and I'd like to  share with you one of the artistic highlights of my time in Europe.

Over the few months, prior to going on holiday, I began corresponding with a lovely lady, Ulla Brunn from Denmark. She wrote  telling me of her love for making boxes and her interest in the fact that I made boxes out of Hanji paper.  We exchanged some information and made plans to meet up in Copenhagen in July.

Her work was exquisite and I was very interested to talk to her about the methods she uses for making her boxes and to compare it with those I use in Hanji.

Some of Ulla's box designs are based on those of another Danish lady who lived in the late 18th and early 19th Century called Kamma Rahbek. Kamma's work can be seen in the Bakkehust Museum in Copenhagen so Ulla and I went together to visit, and see first hand, those handmade boxes made more than 200 years ago out of cardboard and paper. How special that time was.

The Museum is set in a beautiful country home built in 1520 in one of the suburbs of Copenhagen. At the time it was built it would have been out in the country but today it's about a 15 to 20 minute drive from the centre of the city.   The house has been used for many purposes over the last 500 years but it was the family home of Knud and Kamma Rahbek  from 1802 and at that time it was the centre of literary, artistic and social gatherings in what was called the Golden Age of Denmark.

Ulla had contacted the Museum and we were priveleged to have the curator take the fragile, but in surprisingly good condition, 200 year old handmade boxes out of the glass cases for us to see up close.

Here's some information about Kamma that's been translated from Danish into English from the Museum leaflet.

'Kamma Rahbek's grew up in the ancestral brewery in Noerregade in Copenhagen, the daughter of Judge Hans Heger and Anna Louise, she was born Drewsen. In a time when girls' education can be described as poor, her father wanted to challenge his gifted and thoughtful girl, so he taught her botany and astronomy in addition to several different languages.

For example, she mastered English at the age of 10, which was quite unusual.  She was also interested in learning literature, and her relationship with her husband, Knud Lyne Rahbek, friend to Kamma's brother Carl Heger, began as a 15-year old. They became engaged in 1797 and married the following year. The marriage was happy, but they had no children.

In their home at Bakkehuset, Kamma Rahbek created a cozy and hospitable home without snobby or trivial boundaries. Their circle of friends was great and they included literary artists such as Hans Christian Anderson, intellectuals and people of a high status in the community.

One of Kamma Rahbek interests was box manufacturing. This was then a common pastime for the middle classes, who used boxes for storing games, buttons, cigars and more. Kamma Rahbek developed a preoccupation to perfection, and she made her boxes of luxurious paper materials she bought in Hamburg, and conjured up amazing, sophisticated boxes from scratch.

She used some Dresden gold borders of the period 1880 called 'guldborter', claw feet, mirror effects and painted designs or watercolor paintings under glass in the lid and the base consisted of individual works of art.

Most of the illustrations in the boxes were done by Kamma Rahbek herself who had a talent for drawing and painting, and as a young woman she had also received drawing lessons from the  famous Danish sculptor Bertel Thorvaldsen, before he went to Rome. The house guests were often ordered to participate in the manufacture of boxes, including the Norwegian Golden Age painter JC Dahl.'

We were delighted to see these objects up close and spent as much time as we could examining and admiring the boxes. We also saw the table on which Kamma would have worked and the tools that she used which was an eerie experience to  actually see the cuts in the table where she worked in poor lighting conditions. I reflected on how difficult it would have been to do the fine work of cutting small pieces of cardboard, putting the boxes together, decorating and painting without some of the more modern tools we have available today.

This was Ulla's first visit to the Bakkehus Museum as she lives a few hours drive away from Copenhagen so for her it was incredible that she could see Kamma's work. After our visit to the Museum I was in awe of the fact that Ulla had produced such lovely copies of her work, with all the fine details, and Ulla had made her boxes merely from pictures of what she'd seen.

I was thrilled to have met Ulla and her family in person and to be able to share our passion for making boxes. Our methods might be slighly different coming from different cultural backgrounds, hers from Denmark and mine from Korea, but there were so many similarities to the work and mastery of what we're doing today.