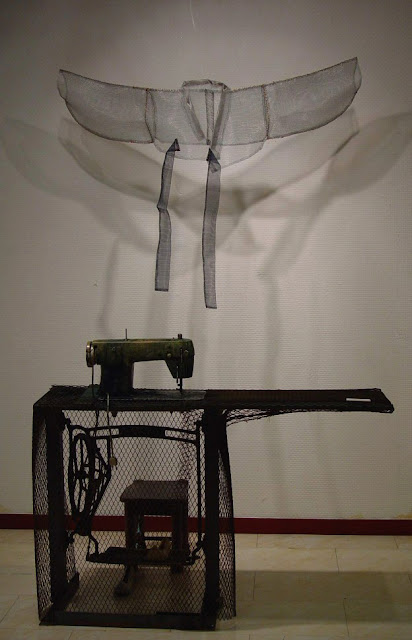 Well this is a momentous occasion when I can actually say this is my 100th blog post !!!

Who would have thought that there would be so much interest in Hanji and its Art.  Over the last 18 months it's seen nearly 20,000 visits and I've had numerous emails asking for help in how to get paper supplies both in, and outside of Korea, questions on where to go for lessons, how to make various household articles and I've even been asked by a western couple how to use Hanji at their wedding in Korea.

I'm delighted that I've been able to help so many people and that I've had the opportunity to explore this art even further than I thought I could.

I'm learning new things all the time and as I move forward it's a bit of self indulgence to take the time to reflect on where it all began a few years ago. At that time making articles out of Hanji was just a hobby that I enjoyed, but the more I worked with the paper the more I became enthralled at its amazing qualities and the way it molds to the cardboard when wet and yet it's so strong, fresh and vibrant when it's dry. I had a few papers I'd bought back from Korea but I was beginning to want to find more and I was finding it difficult to source.

At that time my friends and I were having craft evenings every week to give us a break from work related activities and to satisfy our creative instincts. One day I asked if they wanted to try Hanji.  Well they really enjoyed it as a craft that was different from anything they'd ever done, extremely creative and the pieces they made were useful. They are now hooked on it so much so that now, nearly 4 years later, they are all still doing Hanji !!

I looked into ways of sourcing more paper and supplies but the language barrier between myself and the Korean companies was a stumbling block. Today I am pleased that I have discovered enough contacts both overseas and locally to keep me well stocked and my passion has grown with it.

I've now collected as many books as I can find on Hanji and Korean designs (there are still a few in the post), I'm researching and planning to write a book in English on Korean Hanji, which will include many aspects of the craft and also patterns for making some articles.  I'm holding more formal and structured Hanji classes, my new studio is now almost completed and this weekend it'll be officially opened and, last but by no means least, my wonderful students are coming back to do more and more projects.


Thank you to everyone who's supported me throughout this ongoing craft adventure and I hope to be able to continue my journey with you for many years to come.
at February 27, 2013 No comments:

My Hanji studio is finally set up thanks to my wonderful  husband who is a great handyman and so this week it was the venue for my hanji classes.

I'm delighted that I now have my own space in which to teach and work on my Hanji. I now have a 3 metre long table, cupboards, book shelves, baskets of paper, drawers, a display cabinet and rulers all within easy reach.

It's going to make creating my new hanji designs so much easier ........ 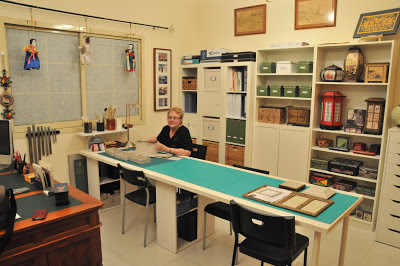 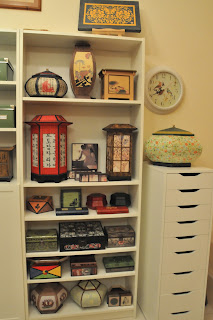 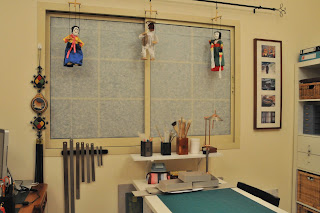 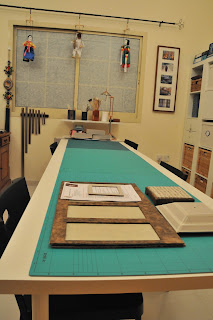 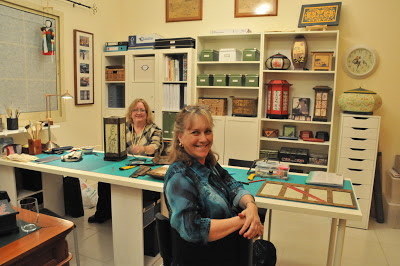 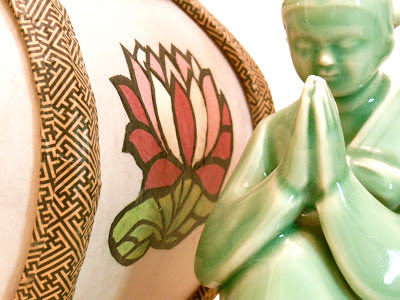 In traditional Korean Hanji art you can see many different designs of plants, animals, letters and insects. I'm sure you've wondered what they all symbolise as they are repeated so often and in many different ways.

In this post I just want to take a brief look at the lotus plant and what it symbolises for the Korean people. I've used this design on a few articles but I never really knew the full meaning of what it represented until I started doing some research for my book.  Even though many of us aren't Korean we can still use these designs and in so doing, translate a deeper meaning to our articles. Here are a just a few of my favourites from the easiest to the more difficult to cut out. 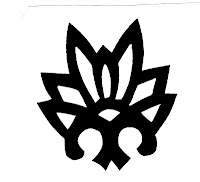 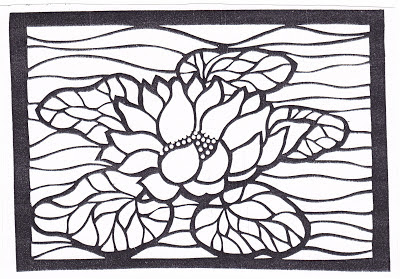 The lotus flower symbolises creation, birth, liveability and reproduction and therefore it's one of the most  important symbols in both Korean culture and its traditional religions.

In both Confucianism and Buddhism the lotus flower is seen as a symbol of honest poverty and virtue associated with an aloofness. Poverty and virtue come from the fact that lotus flowers grow in muddy and dirty waters and yet it still has such beauty. It makes no pretence of being better than it is and yet it's naturally beautiful.

When the lotus flower is depicted on an object and given to a young couple along with two mandarin ducks it symbolises happiness for the young couple and its one of the  traditions that is still practiced  in modern Korea today.


When there is a lotus flower and a fish it symbolise affluence in material things and a sense of mental relaxation.

Because  the lotus plant bears flowers and fruit at the same time, where most plants only bear fruit after the flowers are gone, another symbolism of this plant is that you will have offspring consecutively.

If a child is seen playing near a lotus patch and holding a lotus flower it symbolises the birth of a precious child.

There are probably many more meanings to the symbol of the lotus flower but this gives you an idea of some of them and the importance in Korean culture that is placed on ensuring everything possible is done to encourage the positive aspects of life. 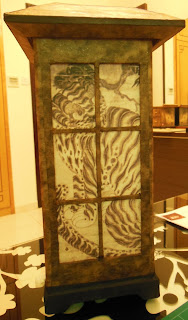 I'm fascinated by the Korean Folk paintings and especially those of the tiger.  They were all done by unknown artists and tend to depict the tiger as being friendly. Despite this I thought that the lamp I was to make needed them to appear behind panes(a cage).

The Korean tiger is regarded by many as the divine spirit that guards the West, people in Korea consider the white tiger as a sacred creature in local folklore.

A tiger that has overcome trials and tribulations and understands the world is known to turn white, becoming a white tiger. Although it is a sacred creature that doesn't harm people, it becomes atrocious when the ruler of the country conducts evil and inhumane deeds. Therefore, it has been told that powerful people become humble and rich people become generous when a white tiger appears. 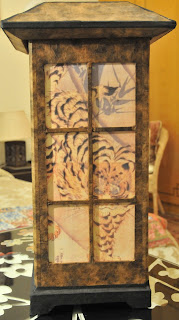 As such, in Korean history and culture, a tiger is regarded as a guardian that drives away evil spirit and a sacred creature that brings good luck – the symbol of courage and absolute power.

The oldest historical record about the tiger can be found in the myth of Dangun, the legendary founding father of Gojoseon, told in the Samguk Yusa, or the Memorabilia of the Three Kingdoms. According to the myth, a bear and a tiger wished to become human beings. The bear turned into a woman by observing the commandments to eat only mug wort and garlic for 100 days in the cave. But the tiger couldn't endure the ordeal and ran off, failing to realize its wish.

There are 635 historical records about tigers in the Annals of the Joseon Dynasty. The story of a tiger that began from a myth can be also found in daily life as well. For example, the 19th century painting named “Sansindo” depicts the guardian spirit of a mountain leaning against a tiger or riding on the back of the animal.


The painting “Jakhodo” is about a magpie and a tiger. The letter “jak” means magpie; “ho” means tiger; and “do” means painting. Since the work is known to keep away evil influence, there is a tradition to hang the art piece in the house in the first month of the lunar calendar. On a branch of a green pine tree sits a magpie and the tiger, with a humorous expression, looks up at the bird. The tiger in “Jakhodo” doesn’t look anything like a strong creature with power and authority. Here again is Gu. 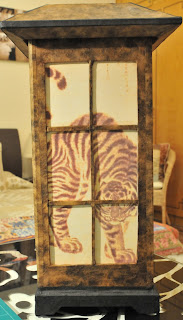 They can be also found around the royal tombs. In front of the burial mound stands the stone tiger sculptures. People believed that tigers also safeguarded the tomb, the permanent home for the dead. The sacredness of the tiger was also utilized for holding rituals that pray for rain. According to the historical records of the early Joseon era, the head of a tiger was offered as the sacrificial offering when performing a ritual praying for rain while Joseon was under the reign of kings such as Taejong, Sejong, Munjong, and Danjong.