Over the last 15 years I've been fortunate enough to have traveled to many different countries with a wide variety of cultures, history and traditions.  I've lived in 3 of those countries for reasonable lengths of time and many people have asked the question, "Which is your favourite?" I ask, "How am I expected to answer that when each has had it's own unique attractions and influences on my life?"

Let me first define attractions, 'the action or power of evoking interest in or liking for someone or something'. These aren't necessarily only on the outside, which  most tourists get a glimpse of,  but when you're fortunate enough to live in a country for any length of time you soon find out that they each have many depths of character (colours) which include the geographical, architectural, cultural, societal, and religious aspects as well. This depth of character is what the country is really all about. 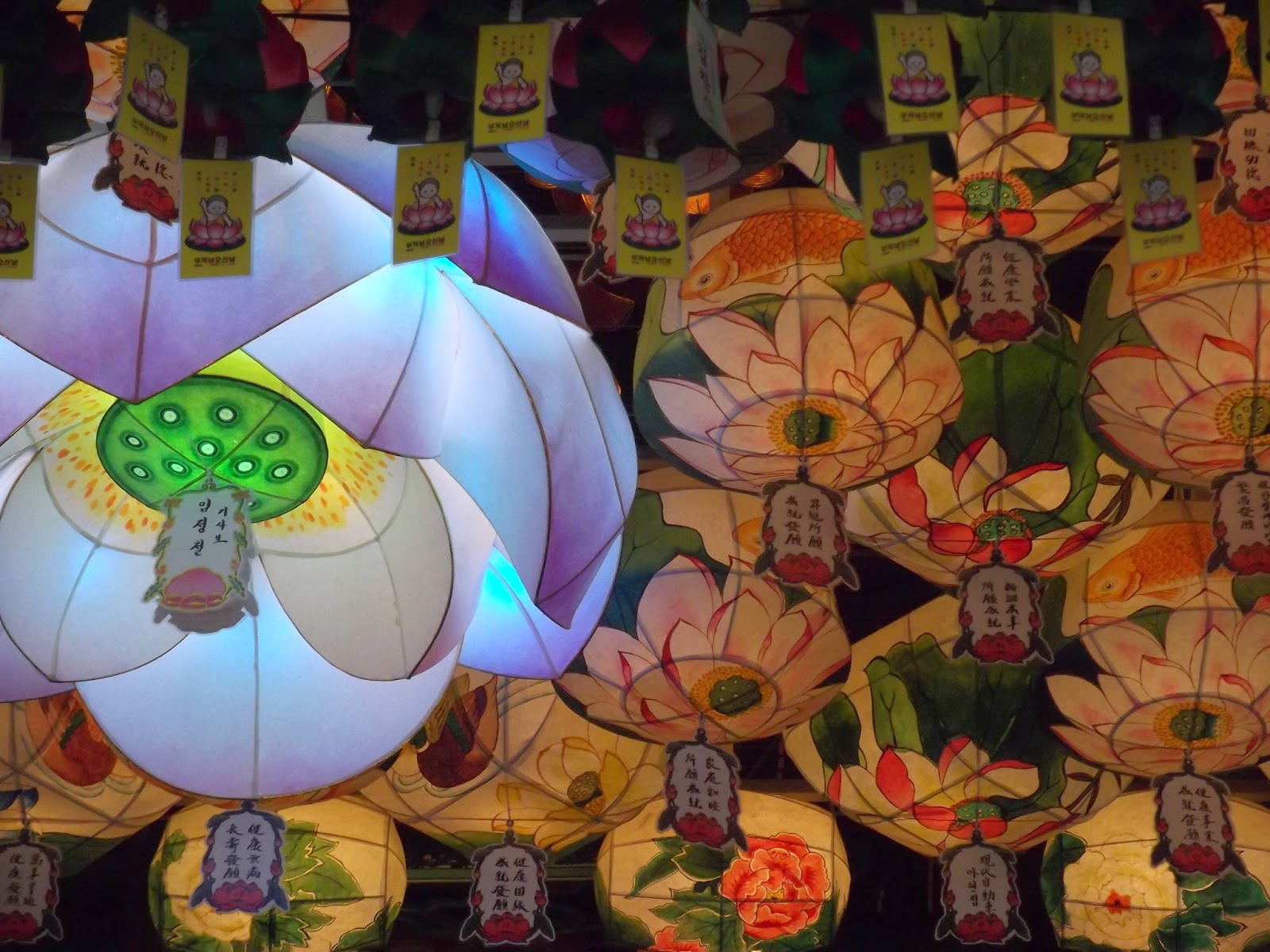 Firstly we went to Korea to live for 3 years and there I discovered a depth of culture that I hadn't ever experienced before. I was born and raised in Australia which doesn't have a very long history of  white Australian culture. The original inhabitants of Australia were the Aborigines and their traditions are amazing, and I don't wish to take anything from them but, they're a long way from the history of the Far East with the Emperors, Grand Palaces and structurally complex societies. White Australians have only been in Australia for around 250 years so it's nothing in comparison to the thousands of years of the documented societal history of China, Korea and Japan.

At first Korea was a culture shock for me as it was so different and yet so fascinating.  Back in the year 2000 there were very few signs in English where we lived and it felt as if we were aliens who had landed on a different planet. We weren't going to be there for just a short time, then going back to what we knew in our home country, so we had to embrace it and learn from the surroundings and the people as much as we could.

This was when I discovered the wonderful world of Hanji and I've loved it ever since.

I so admire the traditional arts, crafts, dress and manner of the Korean people and applaud them for being hardworking, conscientious and polite. Of course in any society you get those who aren't stereotypical but  I found from my own personal experiences that this was true for the majority of people I met.

Because of the wonderfully rich history of that region there are still many of the palaces and old Buddhist temples which are still beautifully maintained and well restored so as to remind them, and us, for generations to come of what the country once was, and where they've come from.

There were things in all countries that we lived in that drove us crazy, they mainly related to the practical side of living like dealing with official protocols that seemed to be so much more difficult in another country than in our own but there were so many more positives that made up for it all. 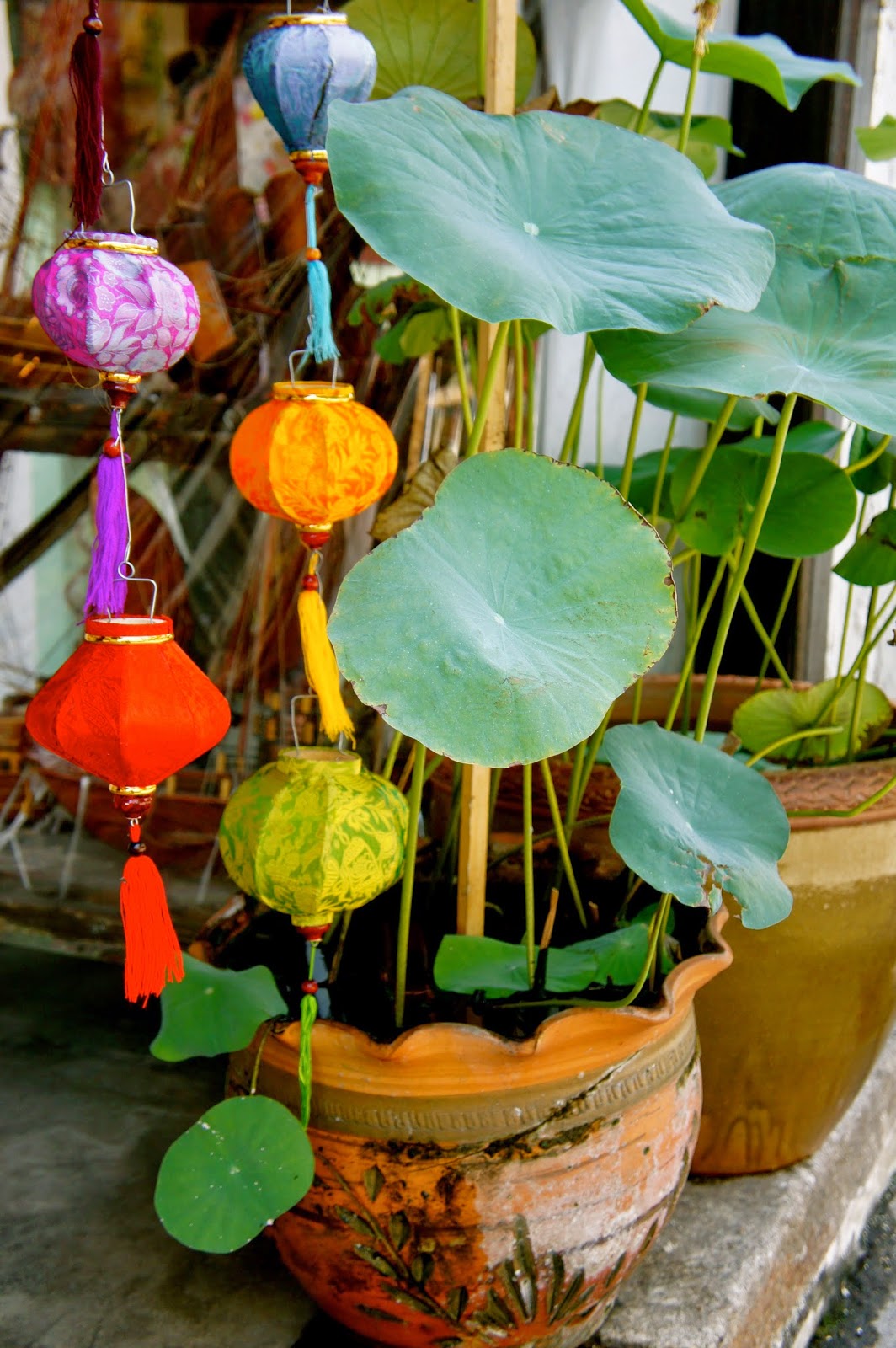 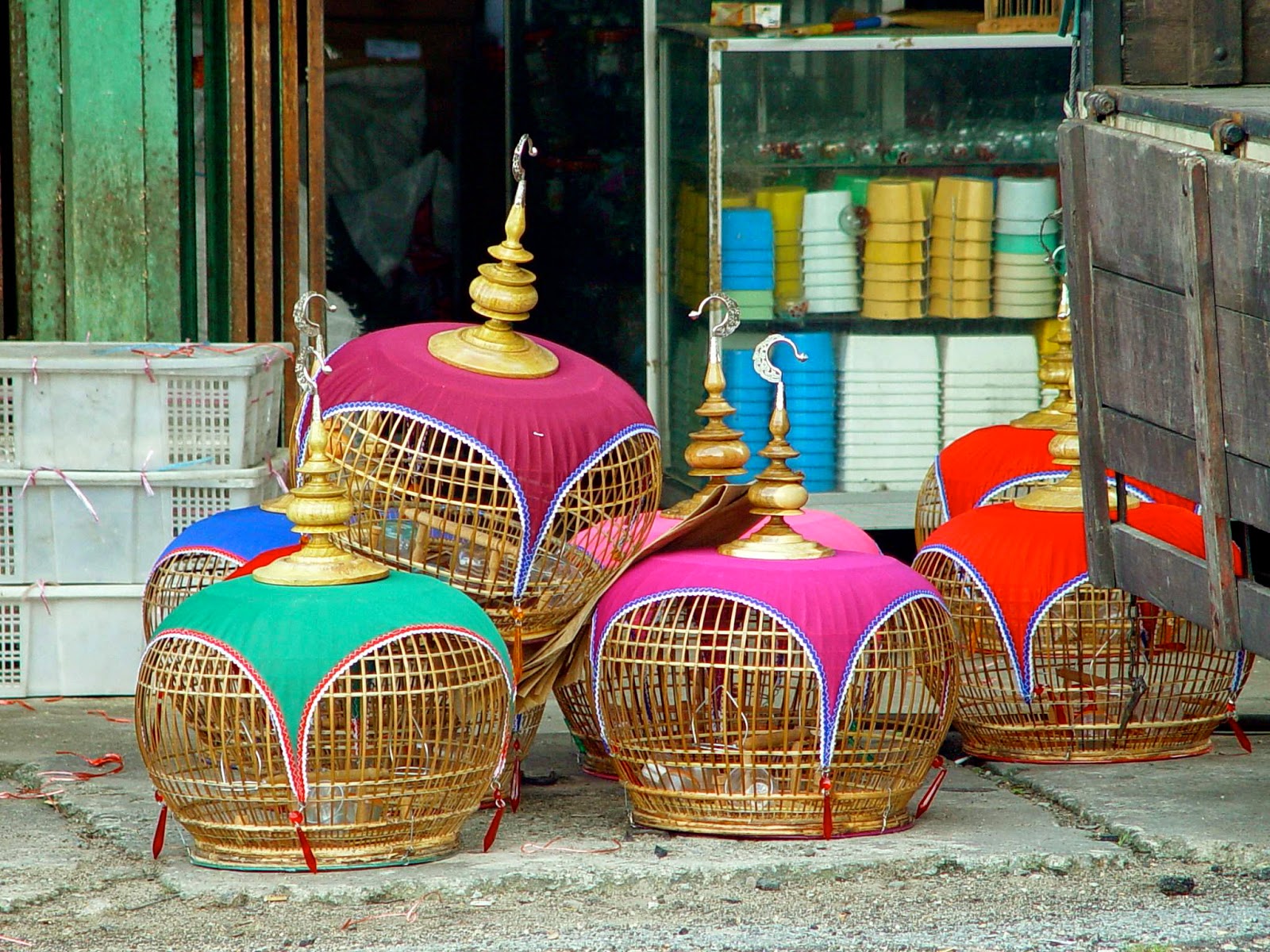 Next we moved on to Malaysia which was very different once again. This move was easier than the first as I'd started to learn how to embrace the differences of the people, language and things around me and take them more in my stride.

Malaysia is a country with three largely diverse ethnic groups, Malay, Chinese and Indian. The  architecture in general is not that interesting but the tropical weather gives the countryside a lush, green blanket which is uplifting to look at and it softens its man made concrete surroundings.

It was great to see how well the Malaysians all got on together and how each celebrated one another's festivals which means, as a working person, you ended up with a myriad of Public Holidays every year  as the country seemed to stop and become a big festival of riotous colours and celebrations.

They have their internal problems and not everyone gets on with one another, especially when equality for the races is not truely practiced as we know it but, they make the most of it and life ticks along quite nicely. Religion plays a large part in their lives with mosques, temples and churches all on display and the people are very relaxed, fun loving and respectful of foreigners.

We stayed there for 5 years until our contracts ran out. and we decided to move on. 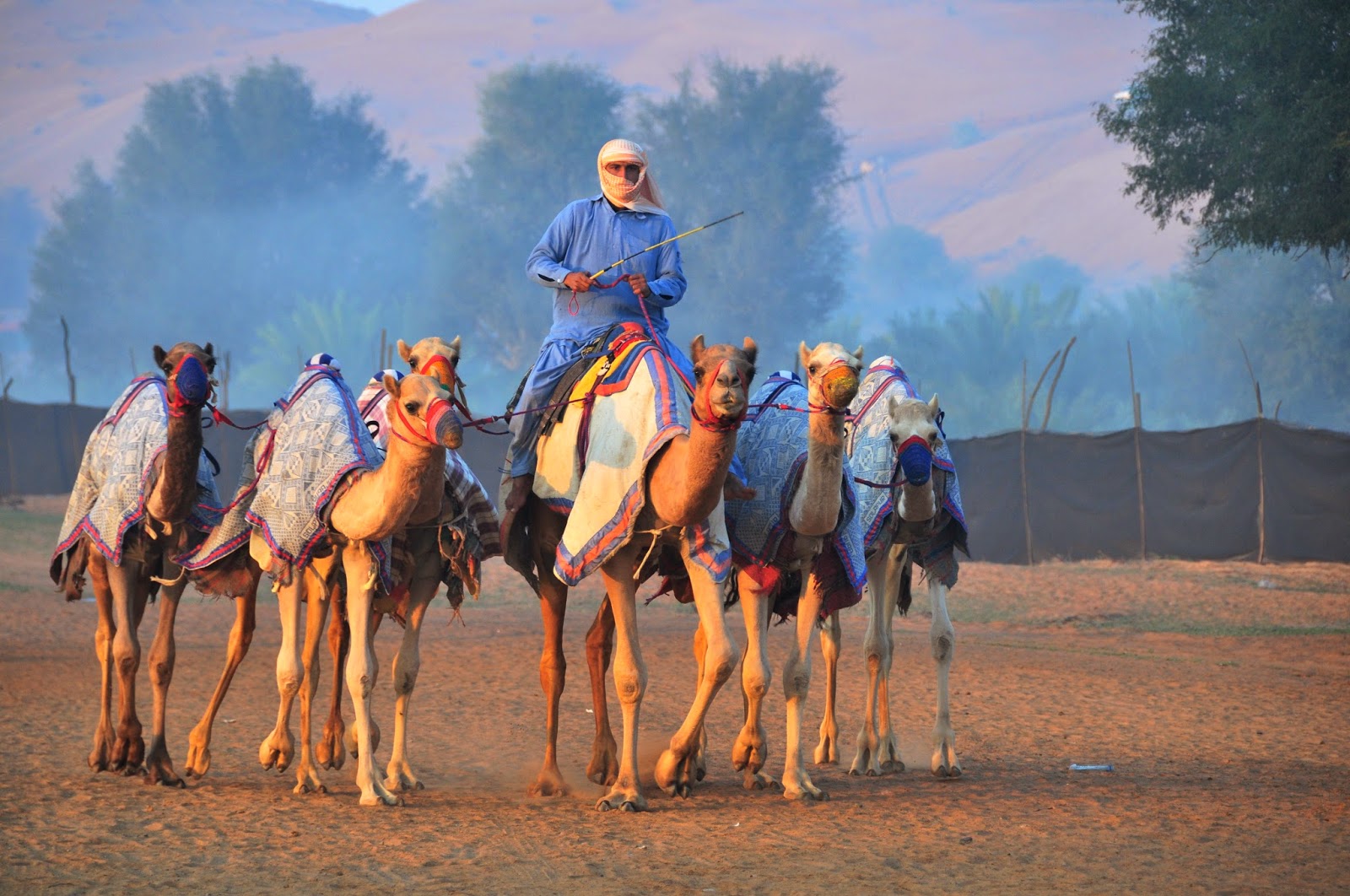 Our  destination for the last 6 1/2 years has been the United Arab Emirates (UAE).  I never had any  desire to come to the Middle East, I was happy to read about it in books and magazines and to see documentaries on TV but it all seemed too daunting to actually have to live in one of these Muslin countries.

To my surprise the transition was much easier than expected and here I've seen so many different colours (layers) in this society not only visually with the yellow, wide open expanses of sand dunes and the glitzy, neon  lit buildings and architectural wonders of Dubai and Abu Dhabi but also in the
barely visible people behind the black and white kandoras.

The UAE is progressively modern and amazingly tolerant for a Muslim country whose population is made up of more than 80% expatriates. It's been amazing to see what the oil money has allowed the Sheiks to do over the last 40 years and how the Emiratis have embraced their relatively new found wealth with gusto, employing only the best architects and builders from around the world to change this country from a once sleepy  desert town into a thrilling and thriving metropolis.

Their religion is everything to them and the country is dotted with mosques which seem to pop up every few hundred metres as you drive through the towns.  The calls to prayer are heard regularly throughout the day but you soon get use to it and barely notice the cries of the Iman after a few short weeks.

I've been able to visit my students stone mountain dwellings where some of them were born in the surrounding caves about 30 years ago, to visit their weekend homes in the desert where they enjoy sand dunning, singing around open fires and eating feasts with them on the floor of their hut as well as  out sailing in traditional dhows on the azure waters of the Arabian Gulf.

How can I choose?

Today is the day that I  head back to Australia to fulfil more dreams.  Not those of travel this time but those of being closer to my family, setting up a Hanji business in Adelaide and having more time to spend on things I love doing. Living in different countries and travelling has given my life a richness of colours like no other and I hope there will be many more to come but if not, I have nothing to complain about. I've taken opportunities when they've been presented to me, I've embraced people  & their cultures from around the world and I've been enriched by every positive and negative experience  put before me.

Sadly I'll be leaving the UAE in a few weeks time to settle back in Australia. It's going to be a huge move for my husband and I after an absence of nearly 15 years from our homeland but one that I'm looking forward to as I'm reunited with my family and I start a new chapter of teaching and learning Hanji back in Adelaide, Australia.
Over the last few months here in RAK, and with the last of the Hanji classes  winding down, the students  had been thinking of what to do to as a final farewell before I leave.  Diana piped up with, 'Why don't we have a Hanji Exhibition?'. I thought about it  and very quickly decided that there couldn't be any better  way to celebrate the classes than by getting everyone together and showcasing the students' amazing achievements.    I ran it past a few people and they were excited at the idea so preparations began.

There were lots of last minute 'finishing off of projects' that they wanted to display. The time came around very quickly and a few nights ago we held the much anticipated 1st RAK Hanji exhibition at the Ras Al Khaimah Sailing Club. 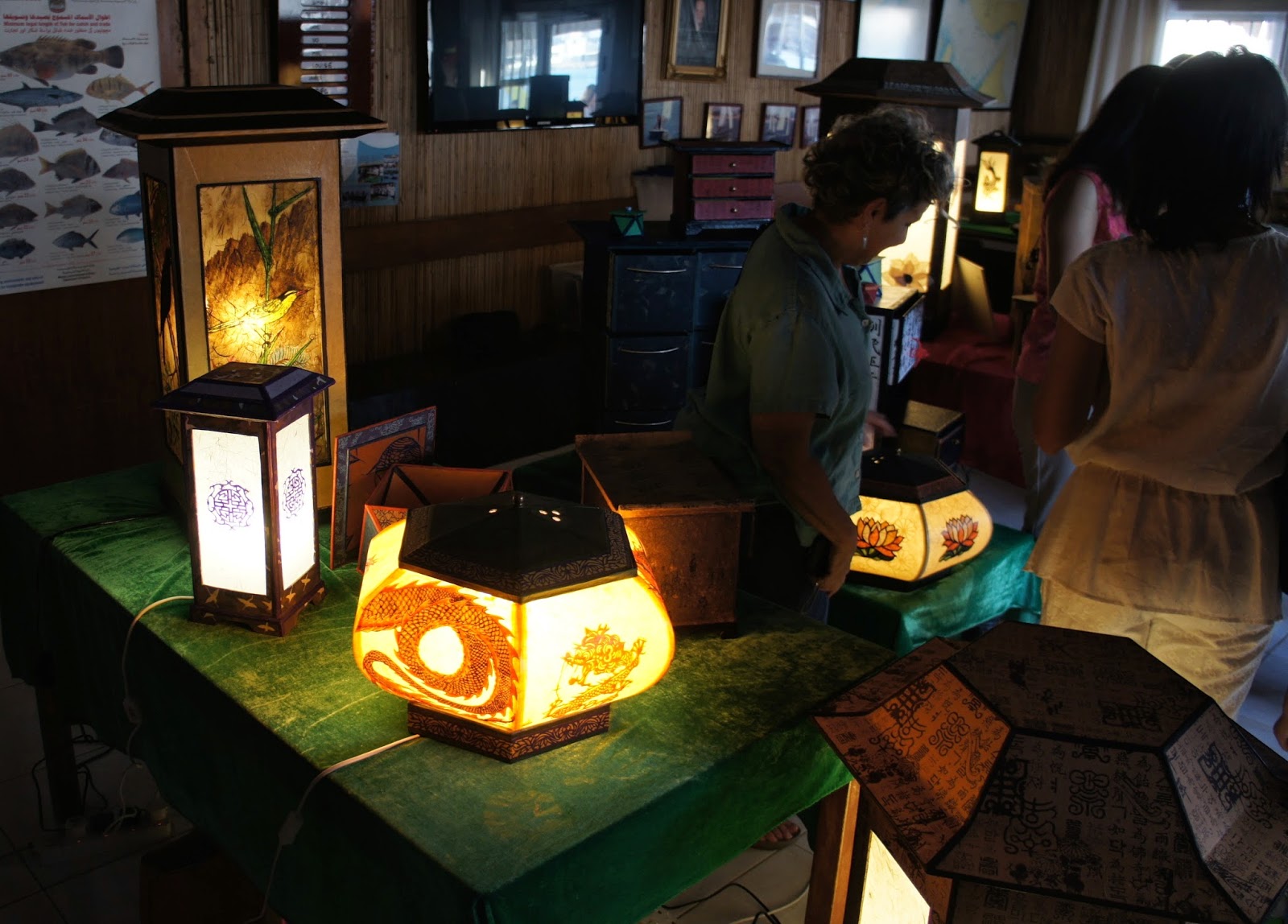 I can't tell you the excitement and pride I felt every time a student placed another piece of their work on the display tables. It was the best gift ever.

The club rooms began to fill up from around 5 pm onwards with people filing through to see the wonderful Hanji pieces on display. There were 'oohs' and 'ahs' all around as they seemed to come out of the woodwork, or is that cardboard, to see what Hanji was all about. 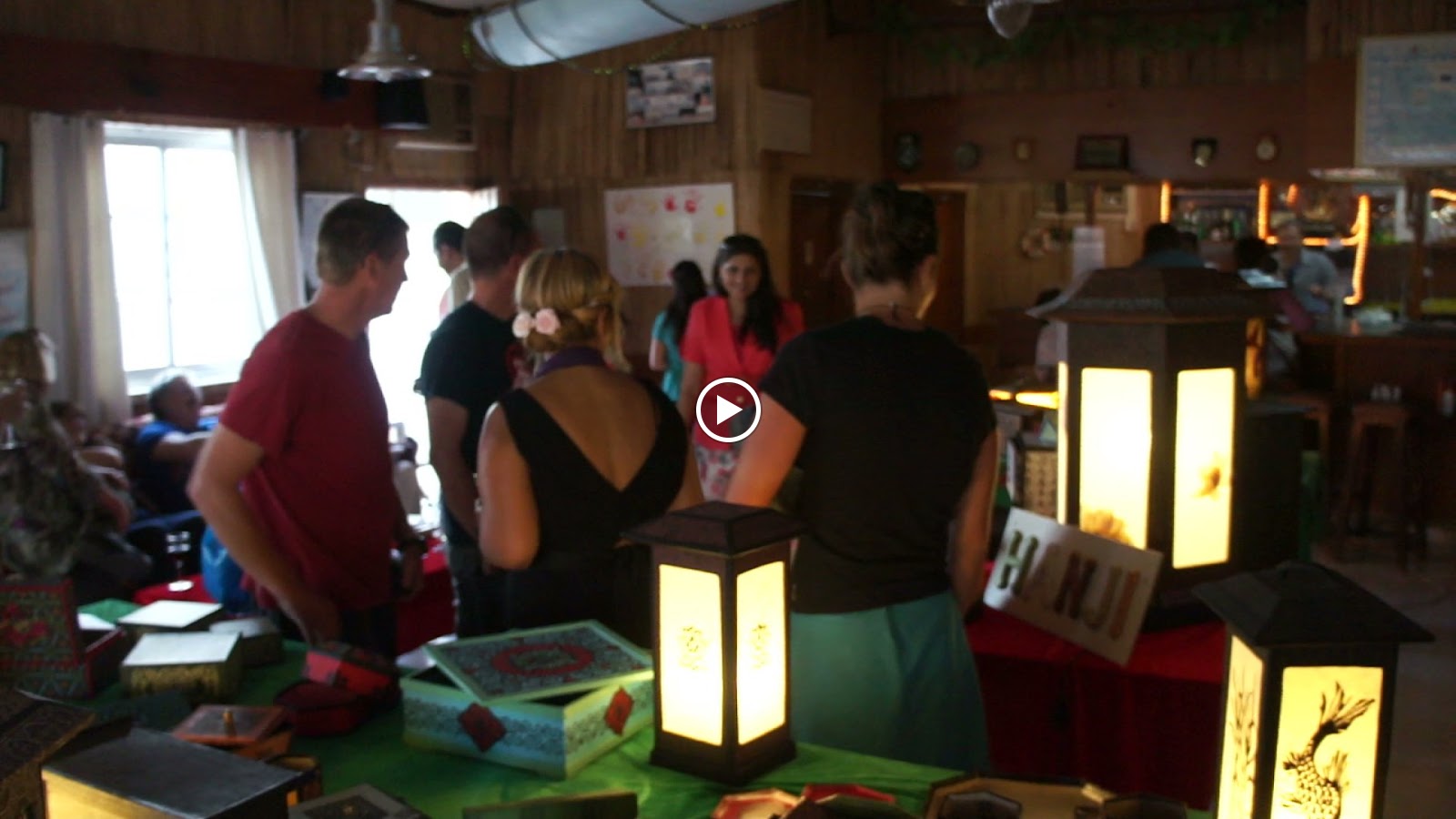 Many of the students have been working in different classes and hadn't had the opportunity to meet or see their fellow students' work so they were able to ask questions of one another and to get ideas for their own future projects. Some approached me with last minute questions about how to continue making their own creative projects and at the same time we all promised to keep in touch wherever we moved to next. 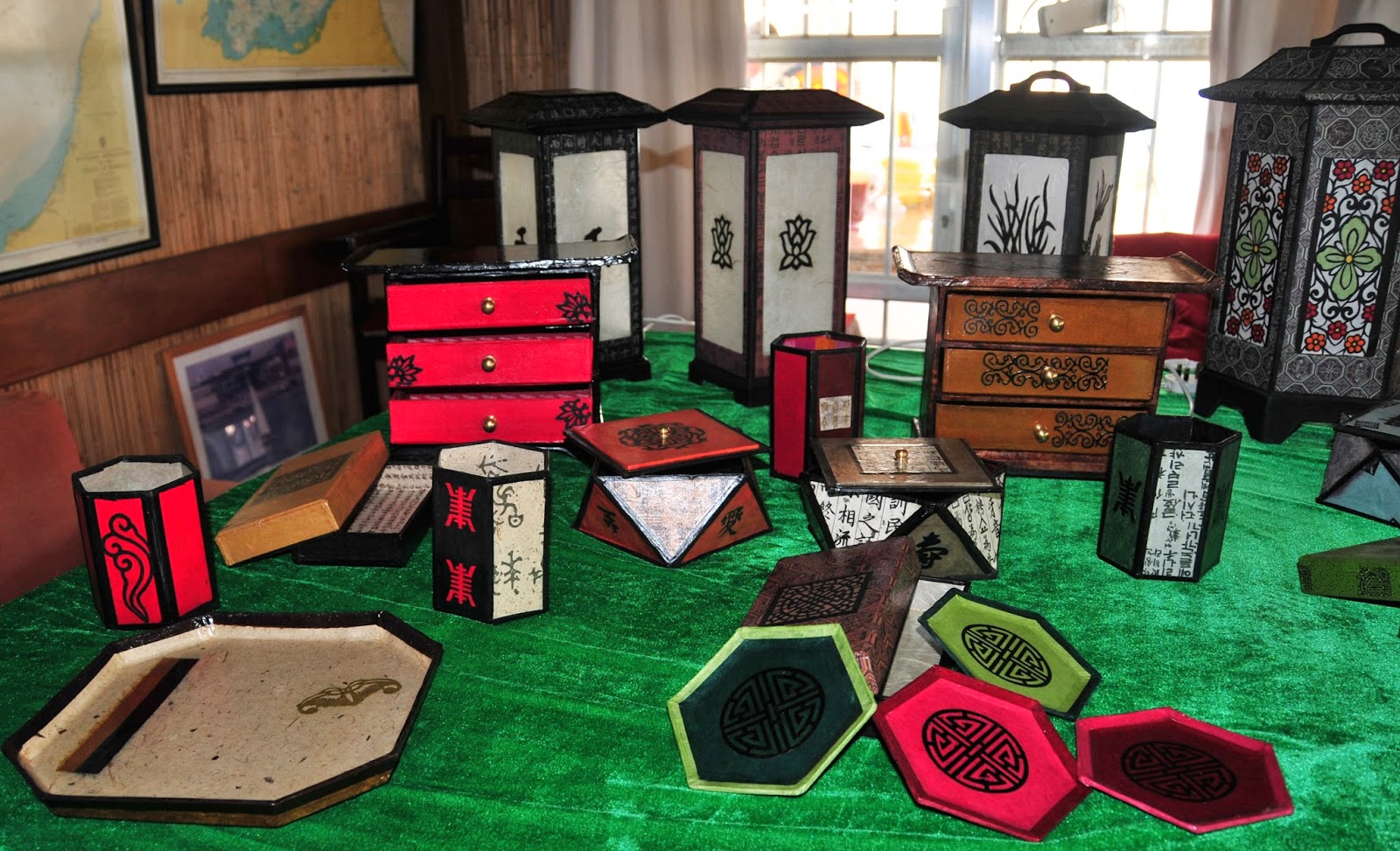 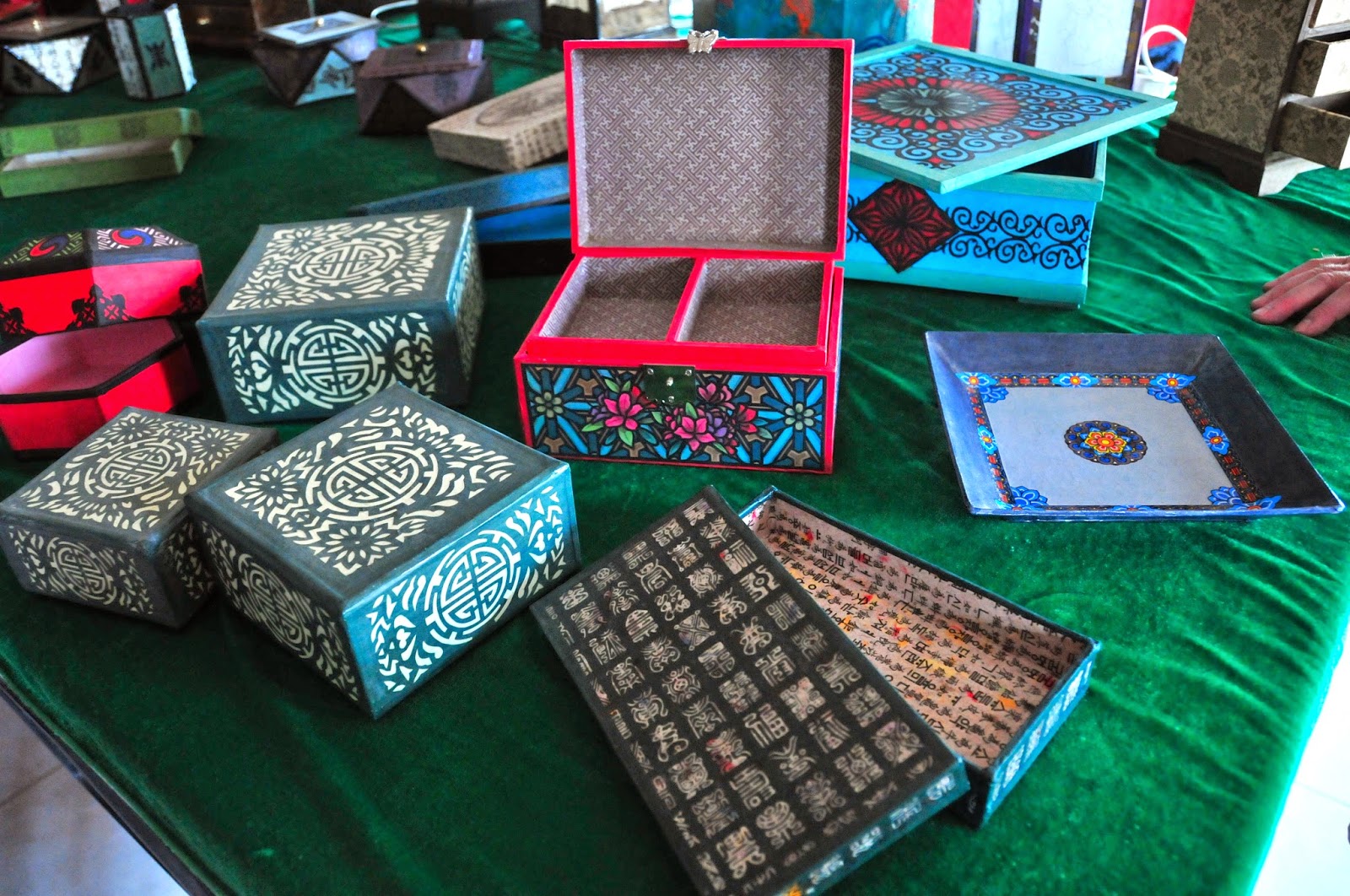 People came  to feast their eyes on the students' work and then some of them went but most people stopped for a few hours to enjoy the great pizza feast made in the home made pizza oven and cooked before their very eyes. There was a wonderfully relaxed atmosphere throughout the evening and a great energy that's hard to describe. 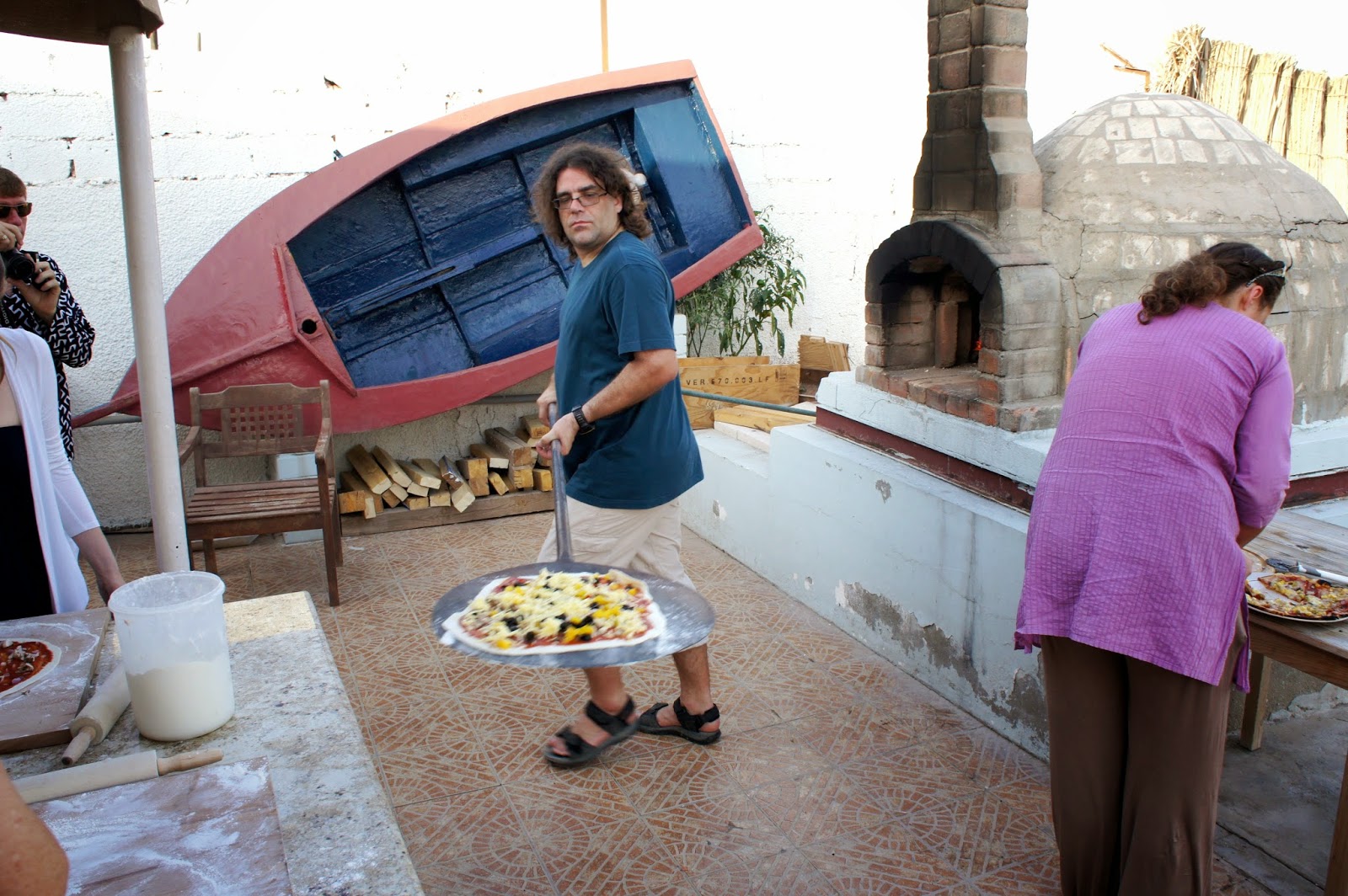 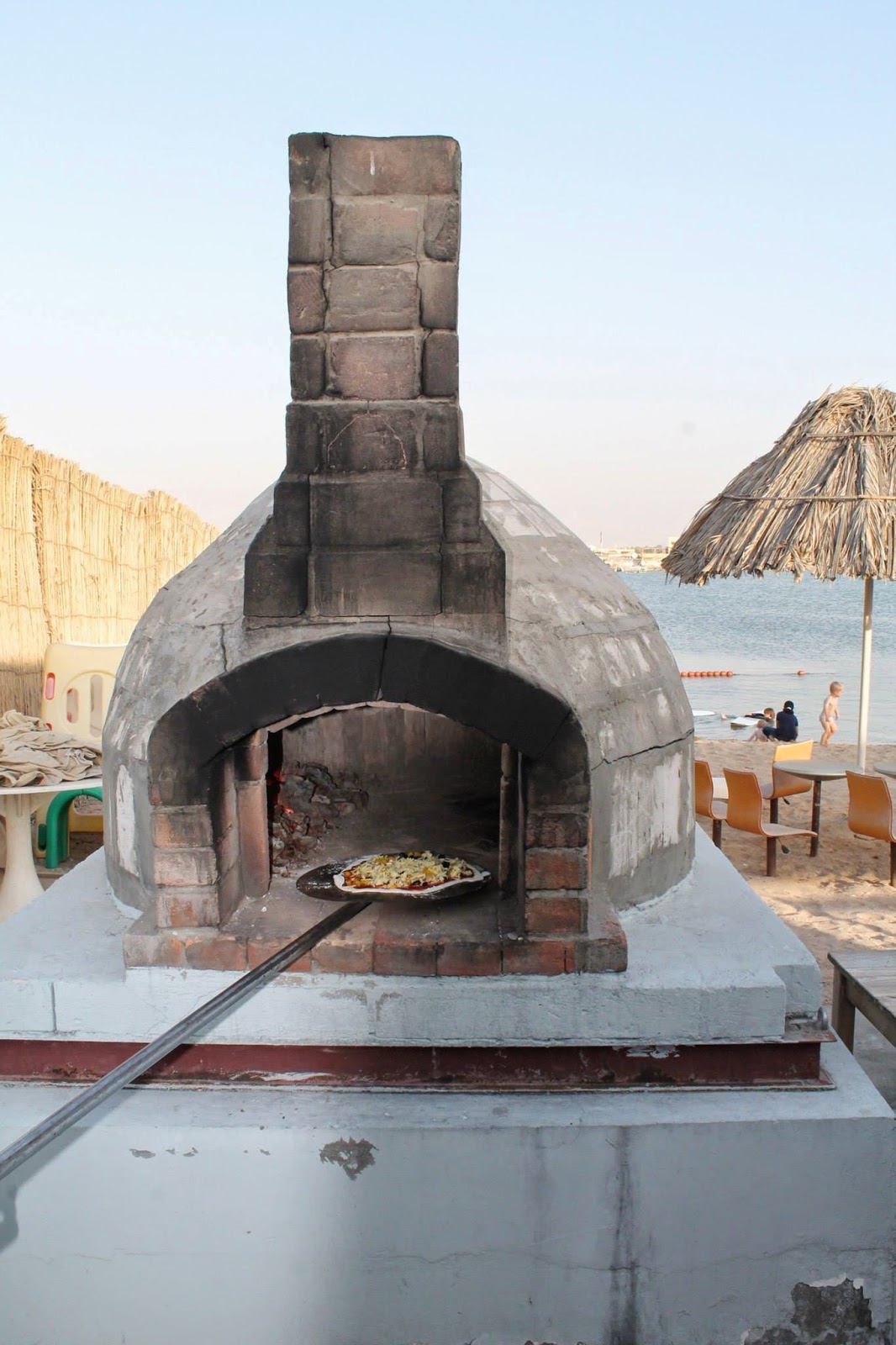 At around 6 pm the infamous RAK Voices put on a performance which was greatly appreciated by those there, especially the Pharrell Williams song, 'Happy' that is so popular all around the world these days. I joined in as I've been a member of this new group for the last few months and it was great fun to perform and to watch the audience's reaction.


During my time here in the UAE I've had the privilege of meeting some fantastically creative people and I've made some wonderful lifelong friends.  As expats we know that the friends we make in countries all over the world will finally not be around us but I feel all the richer for the experiences I've been able to have and the people I've had the opportunity to meet.

One of the students, Christina Van Veerdegem has set up a Hanji Creations group on Facebook where we can all showcase our work, share ideas, and ask Hanji related questions, no matter where we live in the world. She's moving to Jakarta, I'm moving to Australia, another is going to Oman.
If you'd like to join this group please email me with a short note about your Hanji work and I'll send you an invite .

We are spreading our wings and the Hanji community worldwide is growing.  I feel proud to have been a small part in making that happen.
at May 08, 2014 No comments: