Tomorrow I'm heading off to Korea for a week with two of my Hanji ladies, Tricia and Anna and a few husbands. The ladies are going to explore the Hanji shops and meet up with like minded friends who love doing Hanji whilst our husbands check out the Art district of Insadong. 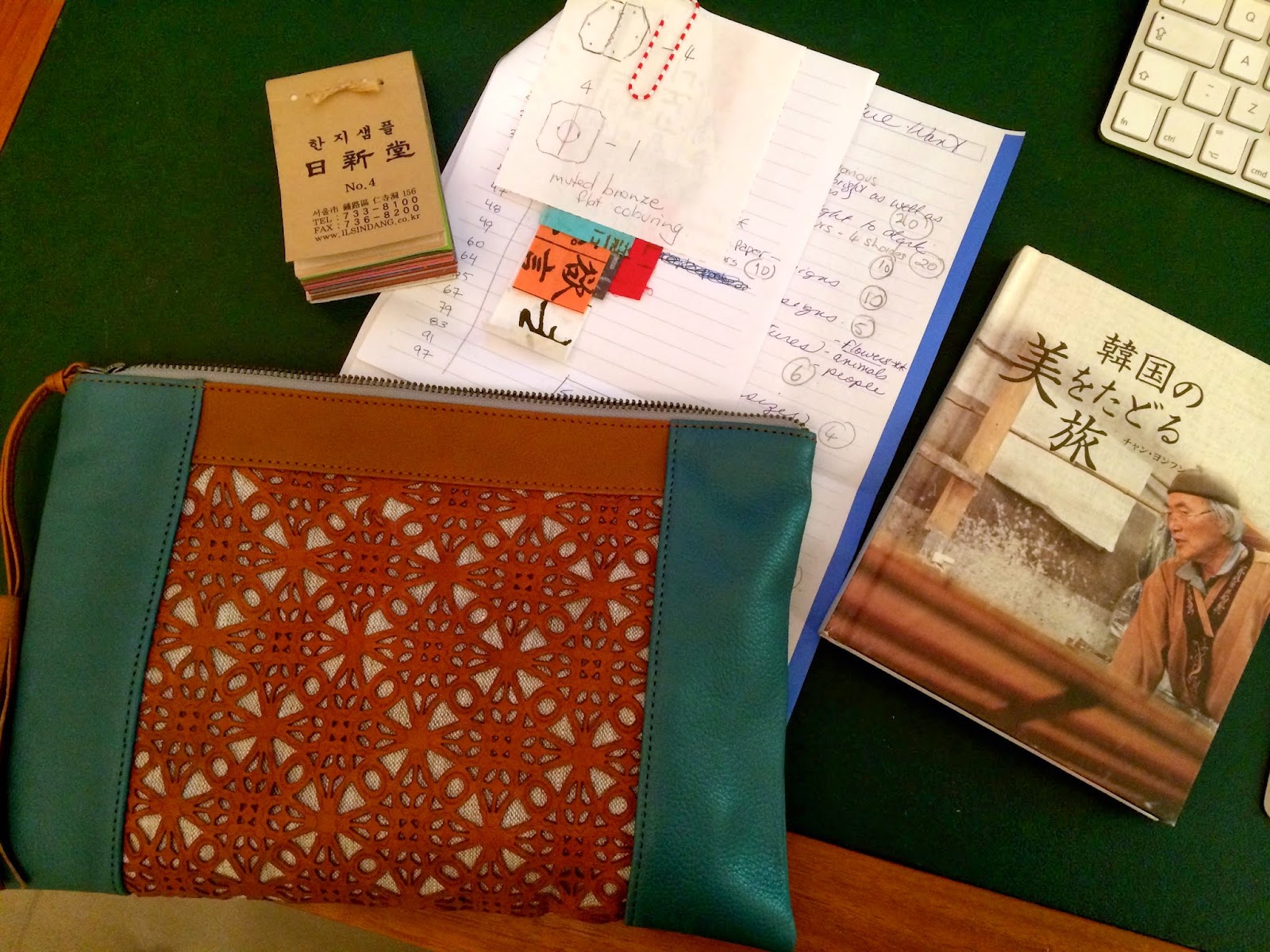 It's been two years since I was there and I'm looking forward to seeing any new papers that are available and checking out the latest designs in the Hanji paper, Hanji craft creations and hardware. It's always much nicer to be able to see and feel the papers rather than ordering online.  I also have a long list of things to get for other people so it's going to be a challenge to find everything, but I'll do what I can.

On Sunday at 4 pm I'll be giving a talk at Jankura Artspace in Itaewon, Seoul called 'Hanji - after Korea'.  This came about because  so many people have been asking me questions about  Hanji. If you're in Seoul do come along. It'll be aimed at  expats who love doing Hanji but will be leaving Korea in the  future either to go back to their home city or to another country and don't know where to begin to find the materials needed to continue with Hanji crafts outside of Korea. I'll talk about my journey and hopefully it will inspire people to continue what they love doing.

When selecting designs for my Hanji pieces I tend to make stylistic choices as to what will look best on each piece but the Korean designs all have very deep symbolic meanings.  None more than the Buddhist swastika (manja) design. ‘Manja’ (만, Man is “卍” and 만자, Manja literally means “letter Man”) is also called Srivatsalksana in Sanskrit.  It is one of the thirty-two (32) marks of excellence of the Buddha and is said to exist on his hands, feet, hair and waist. 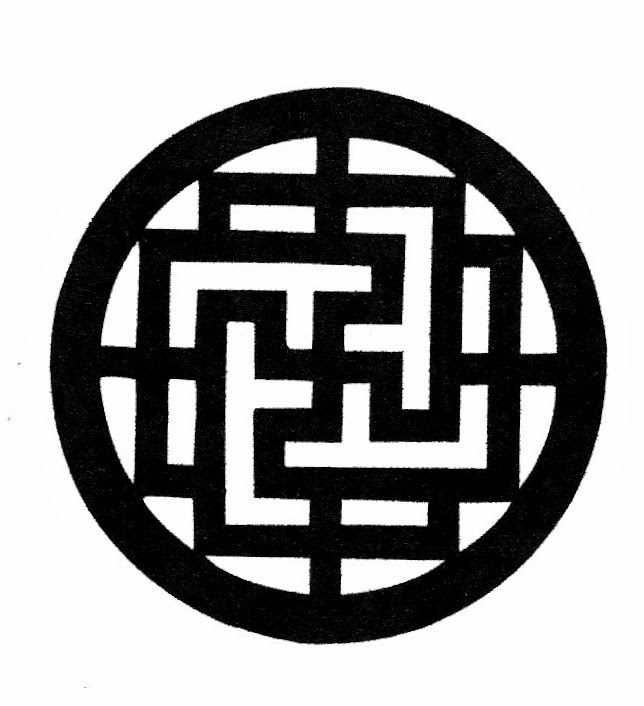 For those of us in the West this is often confused with the German Nazi swastika symbol but in fact it's been  around for about three thousand years.

The swastika is an equilateral cross with arms bent at right angles and all in the same direction, usually to the right, or clockwise. It's a symbol of prosperity and good fortune and it originally represented the revolving sun, fire, or life. The word swastika is derived from the Sanskrit swastika which means, "conducive to well- being". It was widely utilized in ancient Mesopotamian coinage as well as appearing in early Christian and Byzantium art, where it was known as the gammadion cross.

Today, whenever the ancient symbol is used, it is automatically assumed by some people that it is a Nazi symbol. When the Nazis took the ancient symbol, they forever changed the  meaning of the swastika, the symbol of purity and of life.

This symbol for Korean Buddhists, as well as for many other cultures, is an important one, as it represents their history and beliefs. It's a sign of Buddha's mercy and the happiness of mankind portraying the virtues of Buddhism and, because of it's ancient significance, it was widely used in pieces of Hanji craft.

Although most of my Hanji work these days is done in muted colours with predominately black designs on them many Korean Hanji pieces are brightly coloured and each colour of the swastika also has a meaning.

This year is racing by and the dates for the annual Jeonju Hanji Culture Festival in Korea for 2014 have just been announced. 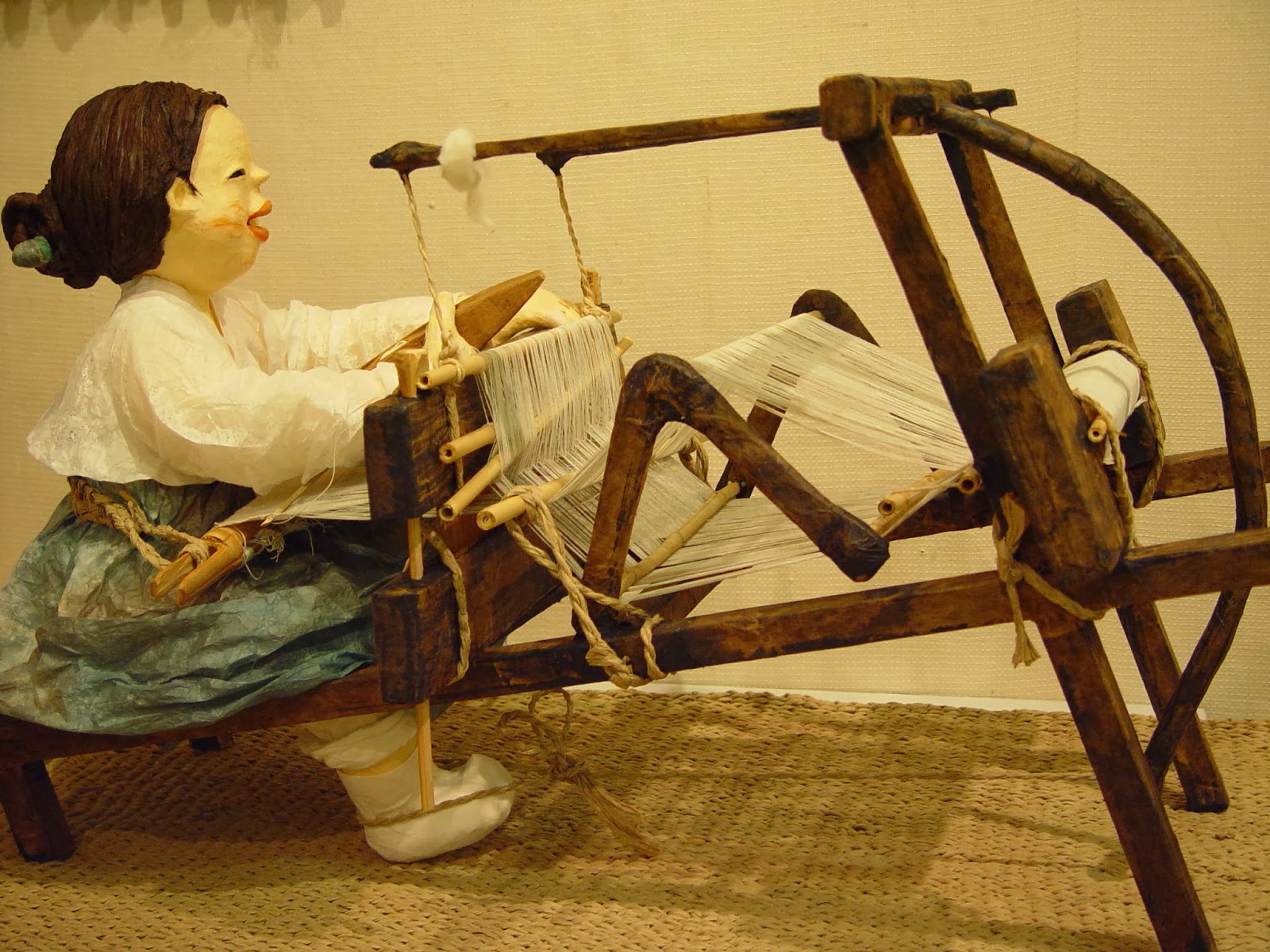 'Hanji' is the Korean word for paper and Hanji artists work with this amazingly versatile material in many different ways. 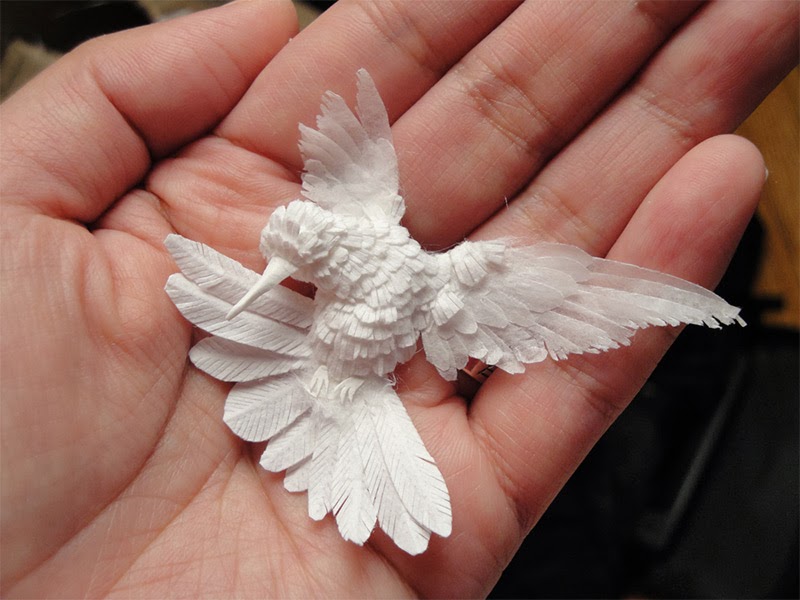 The delicate attributes of Hanji paper lends itself to being used in 2 dimensional paintings, using paper instead of paint, and  in 3 dimensional art which includes, moulding the paper over cardboard  and layering and shaping the paper into highly detailed sculptured objects.


I recently came across  the work of Cheong-Ah Hwang, a Hanji Artist, in a book called, 'Creative Paper Cutting'.

Cheong-Ah Hwang was born in South Korea and now lives in Ohio, USA.  Her parents ran a print shop in Seoul and as a child she developed an affinity for experimenting and creating with paper.  In the late 1990's she began exploring paper sculptures and studied carefully different artists' works before  experimenting and teaching herself  a variety of techniques that suited the style of pieces she wanted to achieve.

Cheong-Ah  cuts and moulds paper into delicate 3D art that is almost 2 D, but not quite.  The cuts and layers give the final object depth and form, but it  essentially  remains a flat piece. She  is now working as an independent artist, guest demonstrator, conference presenter and freelance illustrator. 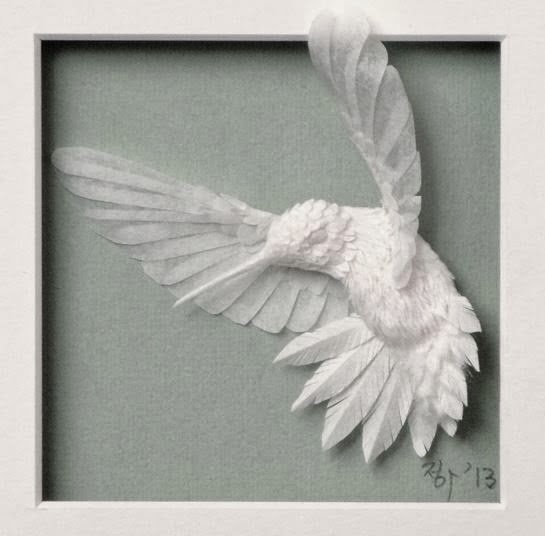 Pictured here are some beautiful humming birds which are one of her favourite subjects for paper sculptures and I can see why.  The  details of the feathers cut out of the delicate Japanese (but I'm sure Hanji  could also be used) paper give the sculpture a jewel-like quality with every layer being cut adding to the texture of the sculpture. I love the amazing wings cut out of a delicate, almost translucent, Hanji paper which show a contrast between the smaller and the larger wing feathers. 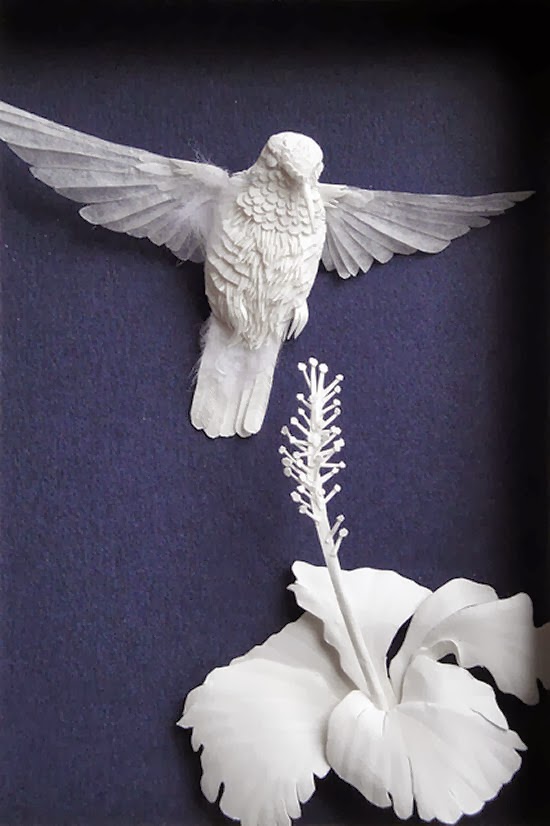 There is so much detail that I could look at the pictures for hours. What an amazing skill to make these delicately sculptured pieces of art.  I'm in awe !!

For more of her work check out this Pinterest website or you can buy some of her pieces on ETSY .
at March 04, 2014 No comments: