Suji Kim a beautiful, young Korean is a 'Linking Traditional Artist' who embodies a new generation of Koreans who are working with their age old traditions and bringing pieces of Hanji art into the 21st century.

Her background is in fine arts and her interest is in the symbolism of folk paintings which she reproduces onto Hanji.

Traditional Korean folk paintings portrayed the simple lives of everyday people  and were far from sophisticated and yet the characters, animals, birds, flowers, nature and  seasons all had symbolic meanings. When adored on screens and as paintings on walls they created pleasant surroundings with constant reminders to their traditions and values. Korean Folk Art is a dying art form because the majority of modern Koreans, as is true all over the world, would rather have minimalist designs adoring their homes.

Suji Kim's interpretations of those paintings onto Hanji paper has won her accolades  and as a 30 something year old she is about to be recognized and awarded as the youngest Hanji Artist in Korea for her outstanding work and contributions to keeping Folk Art paintings alive.  She conducts art classes and has some very talented students that I was able to meet up with during my time in her studio.

She also makes both 2D and 3D Hanji pieces using traditional methods and  incorporates Jiseung, the art of twisting and weaving Hanji paper, using it to make objects, or as an embellishment on her pieces.


During filming I met up with her at the Gahoe Museum in the Insadong district. Here she explained to me the symbolism and meanings behind some of the paintings on show and  we met up later in the week to work collaboratively on a piece of Hanji art that was to symbolize my journey around Korea during the filming of the documentary.

Working on a 2D project was very different  and one that I found to be  quite challenging as I haven't done much work in this field and I didn't know what materials, tools and supplies were going to be available to me on the day.  It was all very daunting to say the least but I put my faith in the filming team that they would deliver what was needed when the time came, and they certainly did.

I'm use to working alone on my projects and I don't normally have a strict time frame but working alongside Suji Kim was a delight and consequently we thoroughly enjoyed the day together, chatting, laughing and exchanging our Hanji techniques. She even brought along some home made lamingtons, an Australian sweet, for us to share during our session of creativity and collaboration.  It was the last thing I was expecting and I was delighted at her thoughtfulness.

The art piece was to be a textured leaf that symbolized the season in and it was to be divided into segments representing a snapshot of different parts of my journey. From this idea made the leaf  and placed it onto dyed hanji paper with the outline and various segments divided up by pieces of Jiseung, which the whole film crew had a hand in making.

For the background the colours were carefully chosen to be representative of two different thought processes.   All the papers used were those that I'd made on my journey and they'd been carefully dyed using herbs and bark.
Firstly, we used  a deep mustard on the left representing the earth that's turn to gold during Autumn, a mottled yellow and blue in the centre representing  the changing of the seasons and a plain blue on the right to represent the sky.

Secondly, the colours represent Korea and Australia and the mottled centre paper indicates the collaboration of Korean and Australian ideas and techniques which all come together as a backdrop to the leaf.


I wanted to incorporate Korean traditional folk paintings  as well and this is where help from Suji Kim  and her beautifully detailed artwork became an integral part of this project as they merged beautifully with the organic sheets of handmade and hand dyed Hanji. 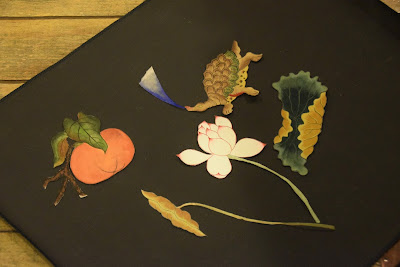 I spoke to her about what I wanted and she quickly drew and painted some stunning symbols  to add to this creative endeavor.

On my journey I saw many persimmons,  or  “gam”, and this fruit is a Buddhist symbol of transformation. Before the persimmon is ripe, it’s green and very bitter. But, it changes its color to a vibrant orange and is very sweet when ripe. It is representative of the autumn season which runs from Sept. to early Dec. and they're plentiful during "Chucheok" Korean Ancestral thanks giving and harvest festivals.

During my journey I was  taken to the Cheongdo Persimmon Wine Tunnel where an old disused train tunnel of about 1 km in length is now being used to produce and distribute Persimmon Wine. This is the first wine production of its kind in Korea and it's exported to countries all around the region and the world. 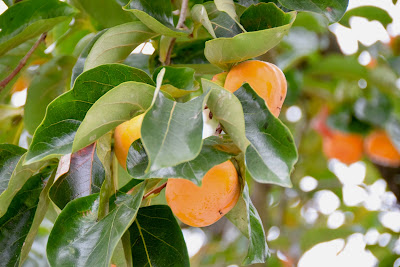 I spent a very pleasant visit meeting the Managing Director of the Wine tunnel, Kap-Soo-Lee who showed me how they were using the persimmons to make this wine.  I must admit I don't think it'll replace my grape wine drinking but it is certainly different and definitely innovative and the taste obviously appeals to quite a wide audience.

Maybe it's an acquired taste.


Another thing that I loved about the Korean countryside, and wanted to incorporate into this project, were the beautiful water lilies(lotus) in the large ponds. Some of the leaves were turning up and changing colours which contrasted against the beautiful, almost perfect looking flowers.

The lotus flower symbolizes creation, birth, livability and reproduction and therefore it's one of the most  important symbols in both Korean culture and its traditional religions.

In both Confucianism and Buddhism the lotus flower is seen as a symbol of honest poverty and virtue associated with an aloofness. Poverty and virtue come from the fact that lotus flowers grow in muddy and dirty waters and yet it still has such beauty. It makes no pretense of being better than it is and yet it's naturally beautiful. 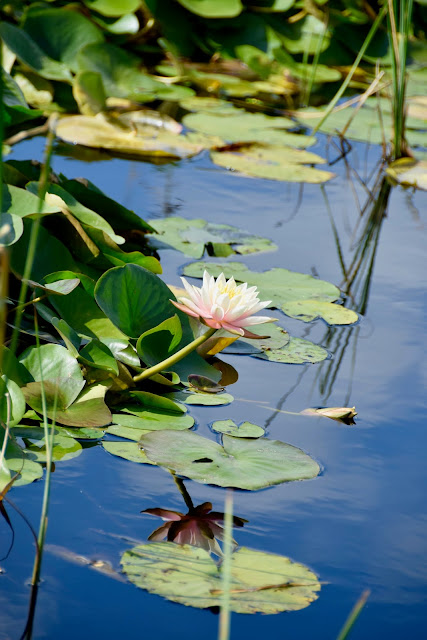 
Finally there was the turtle which stood proudly looking across the pond at the traditional Korean home. In Korean symbolism  the dragon was considered the ruler of all animals but the turtle ruled over the insects and because turtles live longer than other animals, they symbolize longevity.

The flat underside of the turtle represents the earth whilst the top represents the heaven. It is believed to unite heaven and earth. Turtle images often form the base of steles or monuments to famous people, especially Buddhism monks.

The turtle is widely used throughout China, Japan and Korea as a symbol of good fortune and longevity and a positive omen that will bring 10,000 years of happiness.

I feel that this had to be an included symbol to round off this project. 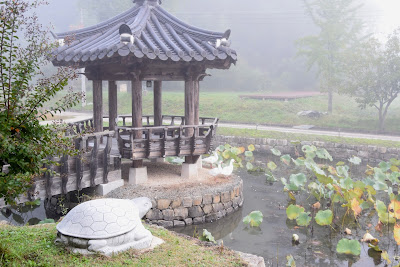 Transformation, creation and longevity is what my journey and this collaborative piece is all about.

This journey has altered my perceptions of what Hanji Art is and it's created many new and exciting ideas of what I want to achieve in the future. It's certainly transformed my thinking about my art on so many different levels through exposure during the filming of this documentary to a wide variety of  artists and places as well as giving me the opportunity to exchange knowledge at a practically, creative level. Through experiencing the work of Jang Ji Bang (Hanji paper maker), Jeong Hyun Ja (Natural dyeing expert), Jeong Yu Suk (Boudoir crafts), Young Dam (Hanji paper maker and artist) and Suji Kim I was able to put all those ideas together and produce a piece of 2D Hanji art through my new and shared knowledge. This experience and its influence will stay with me for many years to come. I'm not sure if it'll be 10,000 years but the representation is one that it'll last a lifetime. 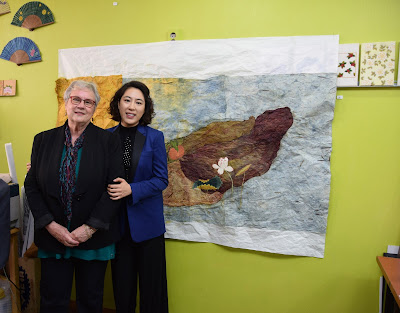 It's an important piece that not only incorporates my journey and the Korean traditional values through symbolism but also the ability for two cultures to be able to truly appreciate, work with  and value one another through their creative spirits.
at January 05, 2017 2 comments: