I've been attempting for years to do some refresher Hanji classes  during one of my usually whirlwind visits to Seoul but,  due to overseas work commitments and a lack of classes that cater for English  speakers, it hasn't been possible. I've had a lot of queries from people wanting to know what classes I took in Seoul earlier this year so I thought that I'd share that information with all of you through my blog. 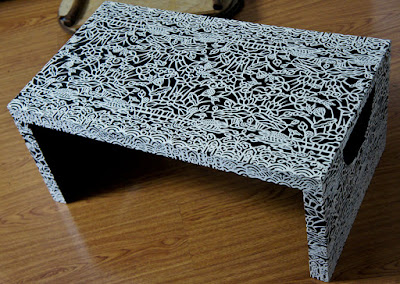 A few years ago I was introduced to Myong Sook OM, an outstanding Korean Hanji Artist who'd studied Fine Arts for 5 years in New York and she was teaching Hanji in English to expats in Korea. She'd held several exhibitions of her work  both Nationally and Internationally and was involved in SIWA (Seoul International Women's Association). Her work is quite unique and I would love to have learnt from her as she was a perfectionist but when I dared to pose the question, " How long would I need to learn ?" I was told that a minimum of 3 months was required and then that wasn't really long enough. Obviously I couldn't have afforded that amount of time from my busy work life and it would have been too expensive to have tried to find somewhere to live for that length of time as well so I put that idea onto my wishlist of what I'd like to do but that was as far as it got. 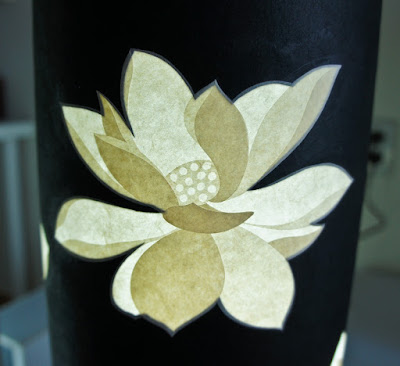 Then last year I met up with Catherine at Hanji Doori , she's a Korean but has lived in NZ for 10 years so her English is excellent. She was willing to take me on for classes at the Hanji Doori shop in Insadong for whatever length of time I could afford and she'd help me and pass on any tips she has learnt over the years she's been doing Hanji.

This turned out to be a very useful exercise and I attended the shop whenever I could for whatever length of time I wanted. There were other students there as well, all Koreans, but they were friendly and we nodded and gestured to one another about what we were doing. I chose a project I wanted to do and selected some techniques I was unsure about and Catherine, very patiently,  helped me through. There were no set classes as such but instead a more relaxed approach to learning traditional hanji techniques.

The other classes I took were at Jonginamoo, a contemporary lighting shop near Buchon Hanok (Village). Up until 12 months ago this shop wouldn't take English speaking students unless they had a translator with them but then Min, a Chinese Korean was employed and he speaks very good English so this shop  suddenly became another option. I'd visited it 12 months ago and was blown away with the beautiful work of the shop owner and it was unlike anything I'd seen before as it combines Hanji paper with timber, metal and fabrics. Their classes were held in the back of the shop in a tiny area but I was able to make 5 lamps in the 5 weeks I was there. 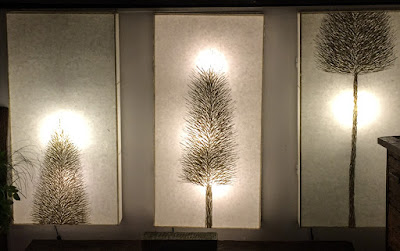 With these 2 classes I was learning pretty well full-time for 5 weeks.  Sometimes I chose to go to just one class and work solidly on my project for hours and other times I'd go to one class in the morning and another in the afternoon.  Luckily the shops weren't too far away from one another and both in the Insadong area.

The experience I had brushing up on my skills were invaluable as I learnt some of the latest techniques but I also realised that I already have a lot of skills that I've taught myself over the years and that I'm doing alright.

The fun part was getting all my projects back home to Australia in what ended up being two very large boxes sent through Korea Post.  I love the post over there it's so reasonably priced and my parcels were here on my doorstep in Australia within 6 days.

A great trip, a great experience and I'm really fired up to try out lots of new and more experimental Hanji projects now that I'm back in my studio.

I was doing some  research recently at the Adelaide State library and I was surprised to come  across a poem about Hanji. 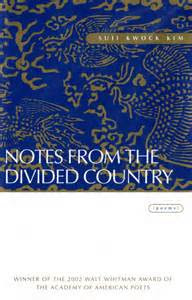 It was written by Suji Kwock Kim, and published in her collection of poems, "Notes from the Divided country'. She's a Korean American poet and playwright and has won numerous awards for her amazing work. 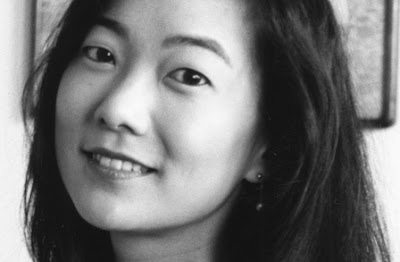 This particular poem talks about the hardships of the papermaker and she dedicates it to Liu Yoon- Young.

I found it fascinating and I'd like to share it with you along with some photos I took during my visit to Korea earlier this year.

Hanji: Notes for a Papermaker

Shaped like a slab of granite
marking a grave, but light,
airy as "spirit-sheaves" lashed
from bloodroot or star thistle, 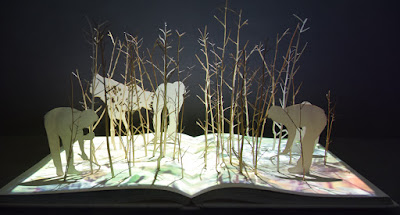 this sheet is not for burial
but making and making of:
a broth of splinters boiled to pith,
cast then clotted to blank.

I touch it, feeling grit and slub
silk, rough as braille. Is it
enough, is this how you hoped
to earn a living, making absence

palpable as pulp, though you laugh,
seeing I'm shocked at how much work
it took. Sow and mulch mulberry.
Slash the trunks down a year later -

chopping slant to sun so stumps
regrow-when their wood's still
tender but strong enough to keep,
no worms gnawing fleam or burl.

Soak, hack the black bark off,
tilt the knife at a sharp angle
to shave the green underskin
without cutting away grain.

Scald the peeled rods with cotton-ash
so acid softens gnurl and knot.
Pound for hours until they're ground
to shreds, skeins of unlikely thread.

You show me your blistered hands.
Poor hands. When you strike a match
to fire, I almost feel the skin sting,
Kerosene flaming yontan - coal.

I don't know what it costs you to love
this work. More than sulfur fumes
tasting of slag, flintsparks cracking,
engine-shunt as your cauldron simmers

hollyhock root to solder all
the elements in a strange solution,
an ecstacy, flecks shapeshifting,
hissing milk, spit, quicksilver.

While it smolders you drag
slung mold and bamboo grille,
sieving with steady arms, long strokes
so fiber won't snarl at the heart.

You wring water, strip your grid,
letting grume clot to the hue
of skull-rot. It'll bleach in sun
to snow, tusk-tallow, peroxide-

depending how long it's left out,
on weather-or you'll dye it
with beets, indigo, sweet potato,
all the colours you have in mind.

In my mind you've become stern.
"For what you want to be, nothing
is something from another slant,
a slate, a plot to engrave spirit

in flesh, mirror or window or O,
Now you know how hard the labor is.
If your words aren't worth
my work, keep your mouth shut."

' Hanji is used in limitless applications, including  wallpaper and an array of household goods made with traditional craftsmanship. The official residences of the Korean Mission to the UN Secretary General Ban Ki-Mun are good examples of the esthetic qualities of hanji interiors.'
Cha Jong-sun
Professor at Yewon Arts University, Hanji Formative Arts Department

Hanji has been showing a resurgence in popularity of late as people are turning to more environmentally friendly lifestyles where the importance of a good quality of life is paramount.
One of the ambassadors for this is General Ban Ki-Mun and his wife who have recently worked in collaboration with he Hanji Formative Arts Department of Yewon Arts University in decorating the Guest Room of the UN Secretary General’s official residence in New York and the official residence of the Korean Mission to the UN with hanji. It's believed that the current Pope is also looking at having his residence decorated using hanji.
The room was decorated based on the concept of “Modest but not shabby, splendid but not extravagant,” which  expresses the esthetic quality of Korea’s ancient Baekje Dynasty, well known for its temperance and dignity. During the hottest months of the year in New York, many UN officials were surprised by the changes made in the building spaces using hanji materials.

The room was decorated with Hanji wallpaper containing wormwood, charcoal and elven  with a traditional Dangcho pattern.

Cloth made with hanji was used for the bedding, sofa cover, and curtains. A bandaji (chest with a hinged front flap) and a two-tiered wardrobe made with  traditional hanji-making technique were also placed in the home.  Hanji-made furniture displays a uniquely Korean color combination and pattern.

Hanji interiors with the handmade mulberry paper made from the bark of the Korean 'dak' tree is lightweight and it has durability and ventilation qualities. It's  also extremely functional as it repels bacteria and insects, eliminates odours, adjusts humidity and absorbs noise. Research has  shown that it creates long wave infrared rays which are good for the human body.
Hanji is not only great for using in craft projects but it's also  good for your health and environmentally friendly as well.

I found these  at the National Museum of Korea in Seoul. It's an interesting explanation of some of the symbols and meanings of items we put onto our hanji pieces.  There are other explanations as well but this collection seems to be quite succinct.

I love the explanations of the butterfly and the cat and I'm sure there must be reasons behind these meanings. I'd love to know more. 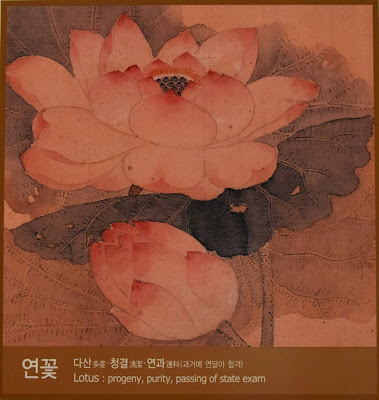 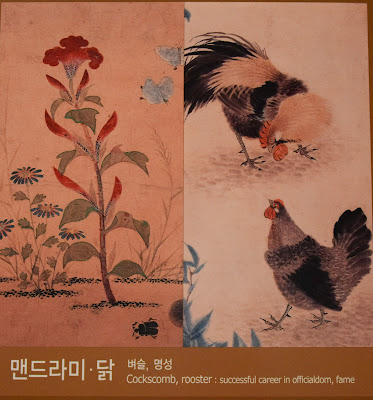 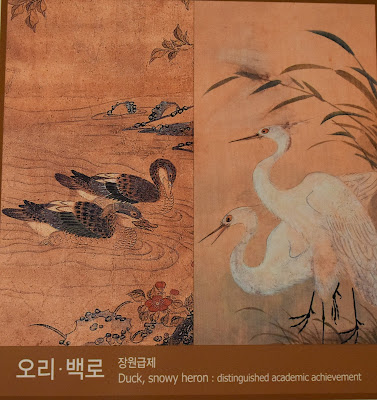 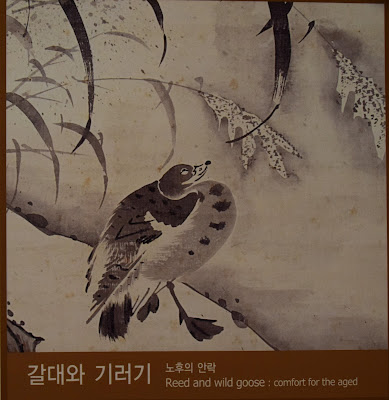 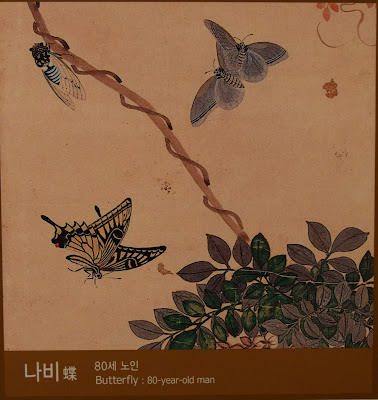 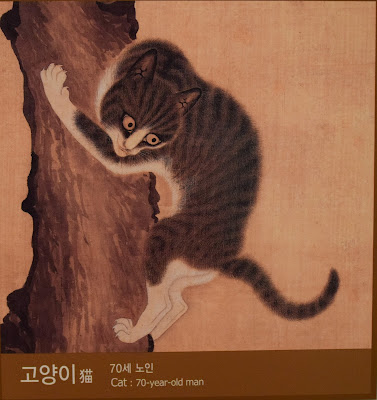 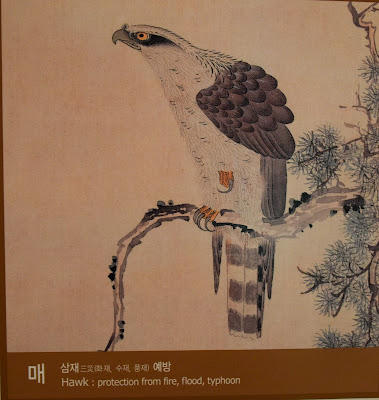 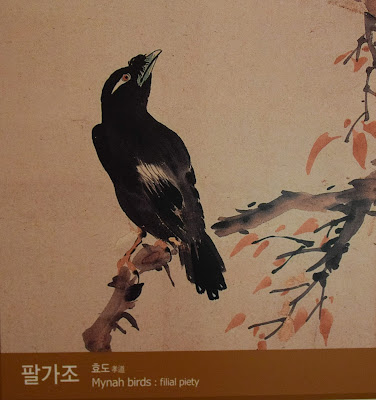 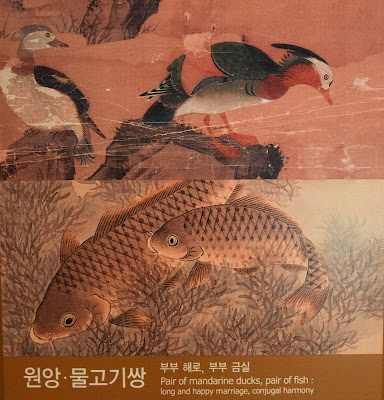 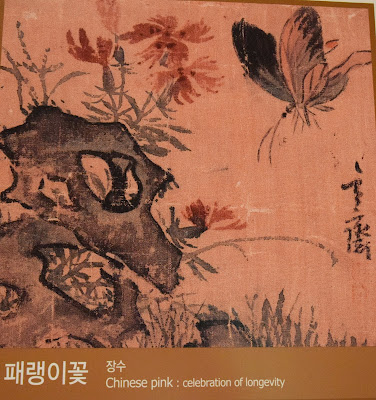 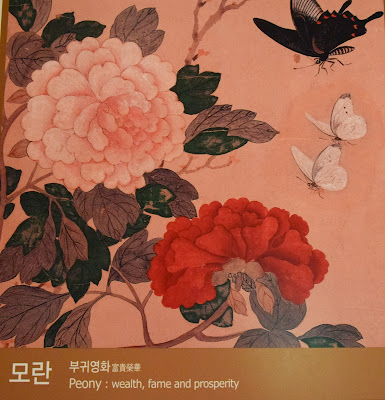