Korean traditional  flower shoes are called Hwahye.  Hwa is a generic term for any type of footwear and hye means a short version of shoes that don't cover the ankle. 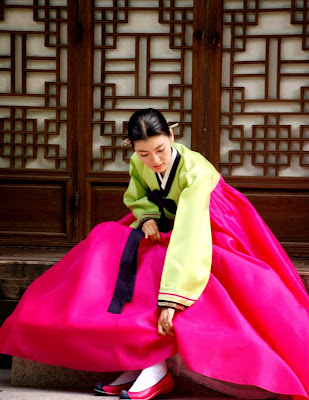 There were over 20 different types of Hwahye shoes  that were worn during the Joseon dynasty and they indicated a persons status and  varied according to someones age, social class and gender.

They  are traditionally decorated in bright flamboyant colours and patterns and are made in either leather, silk, wood or even rubber.  The rubber version was introduced in the 1920s during the  Japanese colonial period from 1910 to 1945 but these days they're only worn by the monks.


As the Joseon Dynasty social hierachy crumbled  in the early 1900's and Korea began to become more globalized in their outlook and customs the need for the different varieties of Hwahye  became less necessary and during the 1930's the Hwahye shoes made way for western trends and the Korean people embraced modernisation except for on special occasions such as  weddings and funeral.


'Mituri' is the Hanji version of the 'hwahye' and are they're only made for decoration and as a souvenir of what was an important part of the Korean traditions during the Joseon Dynasty..